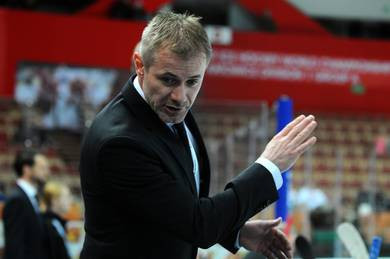 The Ice Hockey Federation of Slovenia have appointed Ivo Jan as the new head coach of the senior men's team after Matjaz Kopitar left after only a month.

Jan has signed a one-season deal with the option for a second year.

His hiring comes after Kopitar, who was only unveiled in June, announced that he was unable to take up the role.

This is because he was offered a job at National Hockey League club Los Angeles Kings as their main scout in Europe.

Kopitar, who had already been head coach of Slovenia once before, during the 2010-2011 season, claimed he did not initially see the clash as an issue.

But following further talks with the Kings he decided he would not be able to offer the Slovenian national team "100 per cent" of his time.

"The offer to lead the national team is surely tempting," said Jan.

"It's a new step in my coaching career.

"The decision was difficult on one hand as I am aware of the tasks ahead of me, and on the other hand it's easy because I know the majority of the players from the World Championship Division I Group A in Poland, and I have also played with some of them in my career.

"I believe our co-operation will be good."

Forty-three-year-old Jan is said to be a "household name" in Slovenia as his father, who has the same name, played at three Olympics for Yugoslavia.

He was the leading scorer when Slovenia reached that level for the first time in 2002 and will now be tasked with bringing the country back to the elite.

Slovenia missed out on promotion this year and will play in Division I Group A again in Kazakhstan in 2019.

They still qualified for this year's Pyeongchang 2018 Winter Olympics, winning two of their three group matches in overtime in South Korea in February, and losing one.

This included a 3-2 win over eventual gold medallists, Olympic Athletes from Russia, who were competing under a neutral flag.

They lost in the play-off round to Norway to exit the tournament.

Jan will now combine the Slovenia job with his club role leading Italian side Sterzing Broncos.