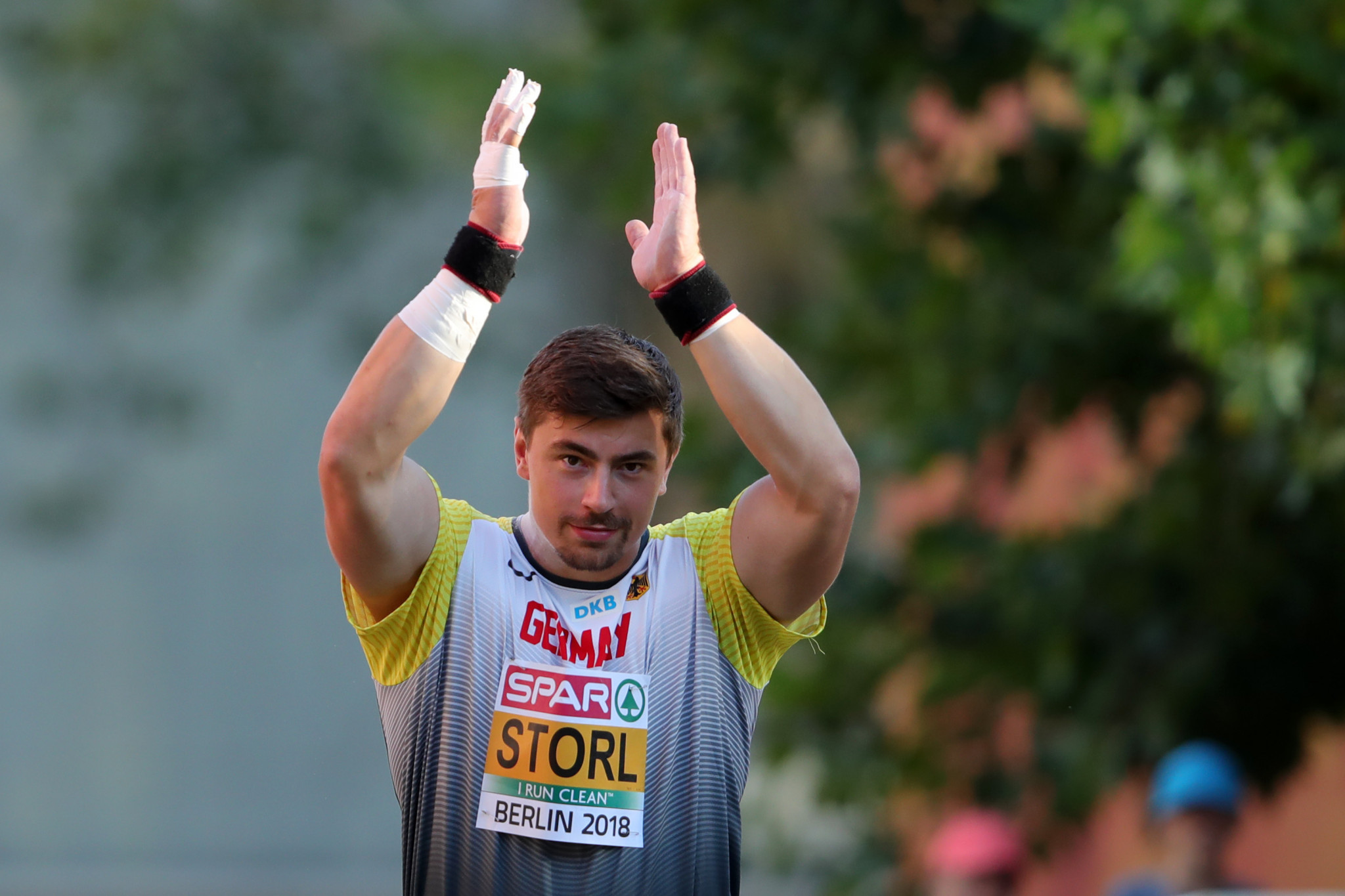 With the opening round of the men's shot put being showcased in sun-shot splendour alongside the iconic Kaiser Wilhelm Memorial Church, at the "European Mile" venue established at Breitscheidplatz in the city centre, there was every reason for this 28-year-old policeman to rise to the challenge.

To the loud approval of a packed and basking crowd within the arena, and with hundreds more sitting or standing to watch on big screens outside - he became the first automatic qualifier for tomorrow's final in the Olympic Stadium with a 20.63 metres throw in his second round, finishing two centimetres ahead of Croatia's Stipe Zunic.

But Storl will do well to arrest the progress of the 26-year-old Pole Michal Haratyk, who leads this season’s continental rankings with his national record of 22.08, and who was third best qualifier here with 20.59.

Authorised Neutral Athlete Aleksandr Lesnoy became the fourth automatic qualifier, surpassing the set mark of 20.40 with his second effort of 20.47.

Poland’s European indoor champion Konrad Bukowiecki, whose season has been disrupted by a persistent finger injury, also reached the final with a best of 19.89.

"Today was the first step towards the final, but despite feeling good, I was a bit nervous because this is my home country, my capital," Storl said.

"The crowd is amazing and that helped, too.

"This year my opponents are very strong, so I have to be careful in the final."

Haratyk added: "I am definitely ready to fight although David has an advantage of having the support of his home crowd.

"I am a little nervous about the final as this is a strange setting for me.

"Today, we competed here in town, but tomorrow, the final will take place in the stadium which I have only visited once before.

"Even though I am ready to throw 22 metres, I feel my team mate, Konrad, could be my strongest opponent."

Defending men's 100m champion Churandy Martina of The Netherlands did not have to expend too much energy to reach tomorrow's semi-finals as the first main afternoon session took place at the Olympic Stadium.

Now 34, Martina was the fastest across the five heats in 10.24sec into a negligible headwind, just four hundredths adrift of his season's best.

"My ambition is to perform better than last time - to win with a better time than in 2016," Martina said.

He won in Amsterdam in 10.07, and he almost certainly will have to do better than that to have a medal chance against a field that includes two men who have run 9.91 this season - Britain's Zharnel Hughes and France's Jimmy Vicaut, two who have run 9.99 in Italy's Filippo Tortu and Turkey's Jak Ali Harvey, as well as Britain's Reece Prescod, who has run 10.04.

Germany's Lisa Marie Kwayie produced the fastest time of the day in the heats of the women's 100m.

Kwayie won a competitive second heat in 11.30 ahead of reigning European under-23 champion Ewa Swoboda from Poland, who clocked 11.33 and Naomi Sedney from The Netherlands, who recorded 11.45.

"This is my first time to compete in this stadium in Berlin," said Kwayie, who will also be part of the German 4x100m team in Berlin.

"I had goose pimples when I entered the infield.

"People supported me everywhere and cheered for me.

"I have never experienced such a great thing before."

But she will have a serious challenge from Britain’s own rising talent, Dina Asher-Smith, who heads the European list this season with 10.92, ahead of Schippers' 2018 best of 11.01, and the 10.95 registered by Switzerland's Mujinga Kambundji on July 13.

The fastest qualifier in the 400m hurdles heats was France's Victor Coroller with 50.10 ahead of Switzerland's Alain-Herve Mfomkpa in 50.34 and Serbia's former world bronze medallist Emir Bekric in 50.46.

Britain's former world and European champion Dai Greene, the team captain, sadly failed to start after his hamstring tightened in the warm-up.

There were also good results from reigning age-group champions in the field events.

Reigning European under-20 champion Miltiadis Tentoglou from Greece led the qualifying round of the men's long jump with 8.15m ahead of Germany's Fabian Heinle with 8.02m - the only two jumpers to surpass the automatic qualifying line of 8.00m.

Hungary's reigning European under-23 champion Bence Halasz led the first round of hammer qualifying with his opening round throw 76.81m although that effort was surpassed in the second pool by reigning world and European champion Pawel Fajdek who produced the longest throw of the day of 77.86m.

He was another automatic qualifier with 76.03m from the first pool.

Seven golds will be on offer on the first full day of athletics here -two in the morning's 50 kilometre race walks for men and - making a European Championships debut - women.

Apart from the men's shot put, and men's and women's 100m finals, day one will also see the men’s hammer and 10,000m finals taking place.