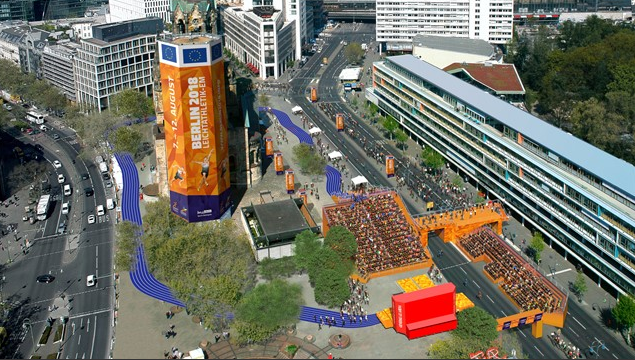 Holding medal ceremonies and other events in the centre of Berlin during the European Athletics Championships will send out "a signal" following the terrorist attack that took place here in 2016, a senior official has claimed.

Christian Gäbler, Head of the Berlin Senate Chancellery, made the claim on the eve of the Championships which begin tomorrow.

A "European Mile" area has been installed in the Breitscheidplatz, alongside the iconic Kaiser Wilhelm Memorial Church, to act as the  finish line for the marathon and walking events.

It will also be the stage for the men's shot put qualification and nightly victory ceremonies.

"Berlin is a sports metropolis, not only of Germany but also of Europe," Gäbler told the pre-event press conference here.

"Of course the Breitscheidplatz is the venue where the terrorist attack happened in 2016, but we want to send a signal and show that we will not bow down to those who want to destroy our society."

In December 2016 an articulated lorry was driven through the Christmas market near the church, an incident that left 12 dead and 56 injured.

Gäbler added that Berlin wants "to mirror the success of the International Association of Athletics Federations World Championships it hosted in 2009.

"We had the big Usain Bolt show back then and we want now to have the same shows this year," he said.

"Great performances are going to be seen in the Olympic Stadium."

"I think it's the strongest Championships we have ever seen," Hansen said.

"I was elected three years and some months ago, and I think what I've been looking forward to most to in those three years is these Championships that we are going to have next week."

The Championships are part of a new multi-sports format that will take place every four years, and are linked in with six other sports currently holding their European Championships in Glasgow, from where Hansen has just arrived.

"I was just now in Glasgow, but I have heard from my friends around Europe that it has been big on TV," Hansen said.

"We have gone into this to get more spectators in the stadium in Berlin, to get more TV viewers.

"I am sure that at the end it will be more from everybody.

"I am sure the sport-loving people in Germany will see that and will think, 'let's be a part of this, let's go to the stadium and enjoy it'.

"I think this format has come to stay.

"And there will be no Championships in this format in future that will be without athletics, I can promise you that."

Hansen added to insidethegames: "Athletics is fully committed to the European Championships for the future.

"Everyone is waiting to see and hold discussions.

"Some sports may want to do their own events and good luck to them.

"But we are committed to the European Championships."

Kowalski said the organisers had so far sold 270,000 tickets.

"This is a pre-sale that no other European Athletics Championships has accomplished before, but we have a very big stadium that needs to be filled so we have to keep up the good work," he said.

"We have found new ways, especially regarding marketing.

"We want to write history with the way that we have created these European Athletics Championships.

"We do not want the European Mile to just be a side event.

"We want it to be the second heart of the Olympic Stadium.

"But now only sports performance is what counts.

"It is show time.

"We have created the framework and now we are happy to set off the start signal."