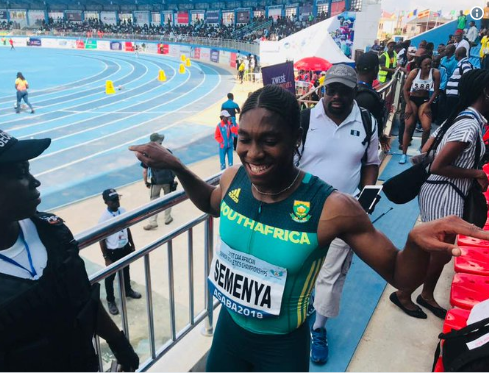 Caster Semenya, South Africa’s world and Olympic 800 metres champion, broke the 18-year-old national record as she took gold in the 400m on the third day of the ill-fated 21st African Athletics Championships in Asaba in Nigeria.

She was followed home by Christine Botslegwe of Botswana in 51.19, while Nigeria's Yinka Ajayi took third in 51.34

The men's 4x100m relay team of individual gold medallist Akani Simbine, Henricho Bruintjies, Simon Magakwe and Emile Erasmus added a second South Afrcan gold on the night as they clocked 38.25 in beating Nigeria and Ivory Coast into second and third respectively in 38.74 an 38.92.

There was a major mix-up in the men’s 800m final which ought to have been recalled after a chaotic start with Kenya's pre-race favourite Emmanuel Korir finishing second behind Botswana’s defending champion Nigel Amos, The Nation reported.

Kenya's Ferguson Rotich, in 1:45.91, and Jonathan Kitilit, in 146.88, finished fifth and sixth in the race that saw the starter blast off before the athletes were ready, prompting some of them to stand still only to take off after the rest of the field was away.

"The race should have been recalled - the organisation at these Championships has been terrible but I’m still focused and will move on," a disappointed Korir said.

There was disappointment for Kenya in the men’s 400m hurdles, however, where its trio, including world 2015 champion Nicholas Bett, who appeared to encounter a hamstring problem in the home straight, failed to reach the podium.

In the women’s discus, Onyekwere Chioma won with 58.09 metres ahead of compatriot Okoro Chinwe, who threw 57.37m, and South Africa’s Ischke Senekal, who reached 53.82m.

The home women’s team, featuring a fit-again Blessing Ogagbare, finished on the track with victory in the 4x100m in 43.77sec.