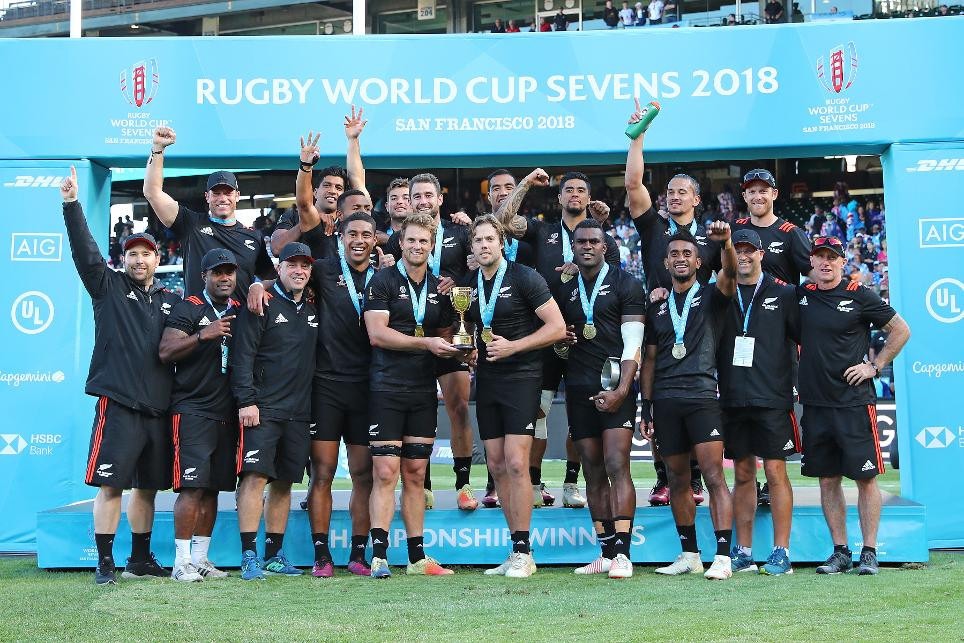 New Zealand became the first nation to win back-to-back Rugby World Cup Sevens titles and also the first to lift the Melrose Cup on three occasions after claiming the men's crown with a 33-12 victory over England at AT&T Park in San Francisco today.

The victory also ensured that just as in the 2013 final in Moscow, New Zealand completed the double with the Black Ferns Sevens having won the women's crown yesterday.

The men's Championship final was a repeat of the title decider from five years ago and the outcome was ultimately the same as New Zealand matched their tally of 33 points from that day.

Sione Molia gave the All Blacks Sevens the dream start after shrugging off England captain Tom Mitchell's tackle to race under the posts inside the first minute.

His second came from much closer range, Molia simply reaching over the line from a breakdown on the England line.

Dan Norton, one of four survivors from his country’s loss in Moscow in their 2018 squad, gave England hope when he broke on the stroke of half-time and enabled Mike Ellery to run round under the posts and make it 14-7 at the break.

New Zealand lost Molia to a head injury assessment at half-time, but they edged further ahead when Joe Ravouvou scored his sixth try of the tournament - enough to share the HSBC Top Try Scorer award with South Africa flyer Siviwe Soyizwapi.

Ruaridh McConnochie hit back instantly for England after good work by Ollie Lindsay-Hague and Tudor Breakthrough Player of the Tournament Harry Glover.

That proved only a temporary setback for New Zealand as tries from Akuila Rokolisoa and Trael Joass touching down to ensure the celebrations could begin early.

"We knew coming in it was going to be tough," New Zealand co-captain Tim Mikkelson, part of both 2013 and 2018 successes along with Kurt Baker, said.

"We nearly got knocked out by France but raised it against Fiji.

"Credit to the coaching staff, the coach brought the boys together."

He added: "We didn’t get the results but we kept on working.

"The double is huge, both the men and women train in the same place and they put pressure on us by winning their final.

"Credit to England who played amazing this weekend and we’re humbled to get the victory."

World Rugby Sevens Series champions South Africa recovered from the disappointment of their semi-final loss to beat Fiji 24-19 to secure the bronze medal.

It marked the Blitzboks' best finish at a Rugby World Cup Sevens since they lost to the same opponents in the 1997 final in Hong Kong.

Captain Philip Snyman and Soyizwapi were among South Africa's try scorers as they established a 22-7 lead over the side they pipped to the Sevens Series crown in Paris last month.

Fiji never really recovered from the disappointment of losing their semi-final to New Zealand 22-17, but did finish strongly with tries by Semi Radradra and Josua Tuisova.

Argentina finished their campaign with a flourish, powering past hosts the United States in a 33-7 win to claim fifth place.

Jamie Farndale scored two late tries to help Scotland come from behind to defeat France 29-24 in the battle for seventh place.

The men's Rugby World Cup Sevens was first held in 1993 with seven editions now having been completed.