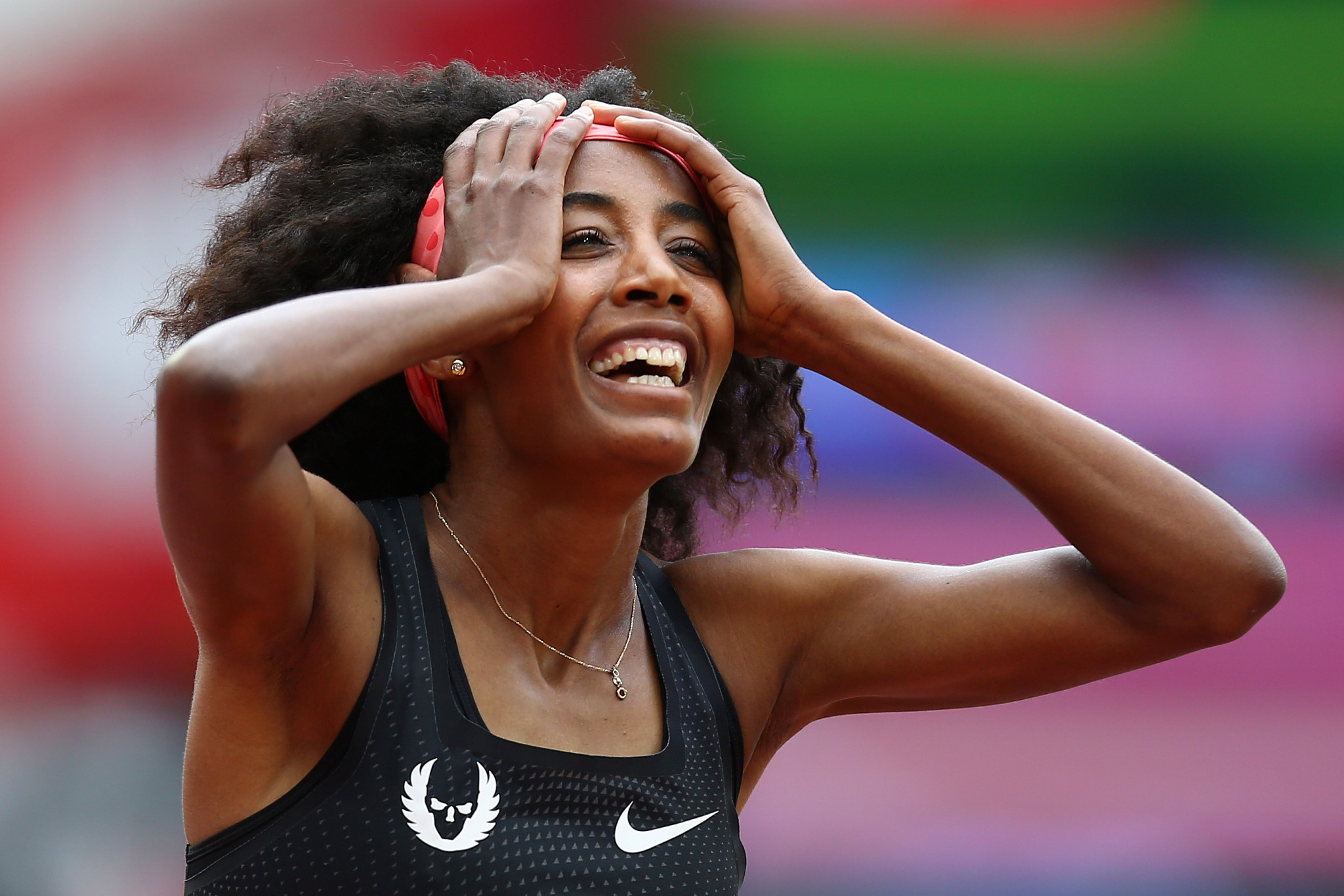 Sifan Hassan of The Netherlands produced a momentous final flourish to two days of action at the International Association of Athletics Federations (IAAF) Diamond League meeting in London as she won the women’s mile in 4min 14.71sec – the third fastest time ever run.

The 25-year-old Ethiopian-born runner, winner of a bronze at the IAAF World indoor Championships in Birmingham earlier this year as she defended her world indoor 1500 metres title, now stands behind Ethiopia’s Genzebe Dibaba, who ran 4:14.30 in 2016, and Russia’s Svetlana Masterkova, whose world record of 4:12.56 has stood since 1996.

Hassan’s time - a national and Diamond League record and, naturally enough a meeting record - saw her finish a clear winner from Ethiopia’s Gudaf Tsegay, who clocked 4:16.14, and Kenya’s world 5,000m champion Hellen Obiri, who set a national record of 4:16.51 ahead of the United States 2011 world 1500m champion, Jenny Simpson, who recorded a personal best of 4:17.30.

"I have the endurance and speed but don’t normally have the last kick and today I did," said Hassan.

"It will be incredible to see how fast I can run in future.

"I’ve managed to run a huge PB (personal best), almost four seconds quicker, and it shows my season is only starting."

Emmanuel Korir of Kenya ran the fastest 800m so far this season as he clocked a personal best of 1:42.05 in a race that pushed four others to break their own personal bests.

His compatriot Wyclife Kinyamal also ran a personal best of 1:43.12, finishing third on a photo-finish behind Clayton Murphy of the US, with Botswana’s London 2012 silver medallist Nijel Amos fourth in a season’s best 1:43.29 ahead of Britain’s Commonwealth bronze medallist Jake Wightman, who recorded a personal best of 1:44.61 to finish one place ahead of Poland’s world indoor champion Adam Kszczot, who clocked 1:44.72.

Having seen her run of 45 consecutive women’s high jump victories  come to an end at the Rabat Diamond League meeting earlier this month, Russia's double world champion Mariya Lasitskene got back to business as usual as she equalled her world 2018-leading 2.04 metres – just two centimetres below her personal best.

Italy’s Elena Vallortigara pushed her all the way, adding an extraordinary six centimetres to her personal best to take second place with 2.02m.

The 26-year-old from Schio has made astonishing progress this year, having started the season with a personal best of 1.91m from 2010.

"This was my first time in the UK and London," said Vallortigara.

"I didn’t feel very good at the beginning of the competition, but then jump after jump my technique improved and I am so happy."

Britain’s Greg Rutherford, making his final appearance at the stadium where he won an Olympic long jump gold medal at London 2012, was in danger of registering no mark after his first two efforts were ruled out but, despite a nagging ankle injury, rose to the challenge to record a final effort of 7.55m as he finished tenth and earned a huge ovation from the home supporters.

"I’m incredibly emotional and I was fighting my emotions all the way through," said the man who at one stage held Olympic, world, European and Commonwealth titles.

"When I went to plant on the third jump my ankle was giving me so much grief that I couldn’t push on it."

There were no such problems for South Africa’s world champion Luvo Manyonga, who registered a meeting record of 8.51m the same distance with which he had earned victory in the same arena earlier in the month at the World Cup before extending his lead over compatriot Ruswahl Samaai with third and fourth round efforts of 8.53 and 8.58, the latter equalling his season’s best.

Samaai was second with a season’s best of 8.42m, with Jarrion Lawson of the US third on 8.25m.

America's Kendra Harrison, who two years ago set the 100m hurdles world record of 12.20sec in this Stadium, was triumphant again, this time in a world 2018 leading time of 12.36, with compatriot Brianna McNeal, the Rio 2016 champion, second in 12.47.

Three quarters of Britain’s victorious world 4x100m men’s relay team kept the party going with a swing as they won in a 2018 world-leading and meeting record time of 37.61 from the previous season’s fastest team, Japan, who registered 38.09.

Chijindu Ujah, Adam Gemili, Zharnel Hughes, taking the third leg in place of world finalist Danny Talbot, and anchor leg runner Nethaneel Mitchell-Blake finished just a little outside the European record of 37.47 they had run in the same Stadium the year before.

Britons Gemili and Mitchell-Blake were in individual action a little later in the day in a non-Diamond League 200m won by Jamaica’s Akeem Bloomfield in a personal best of 19.81 from Panama’s Alonso Edward, who clocked 20.01 ahead of Ecuador’s Alex Quinonez, who recorded 20.31.

There had been reminiscences of an older vintage for British supporters on the previous day as the quartet of Christine Ohuruogu, Kelly Sotherton, Marilyn Okoro and Nicola Sanders belatedly received a bronze medal from the women’s 4x400m event at the 2008 Beijing Olympcs following the subsequent disqualification for doping of Russia, in 2016, and then Belarus runner Sviatlana Usovich.

Croatia’s world and Olympic discus champion Sandra Perkovic, seeking a seventh overall Diamond League title, only managed one legal throw – but that was all she needed to maintain her unbeaten record this season as 67.24m was enough to beat Cubans Yaimé Pérez and Denia Caballero in second and third place with 64.63 and 63.91.

The Netherladnds' double world 200m champion Dafne Schippers, who plans to defend her European 100m title in Berlin next month, had a disappointing outing in the longer sprint, finishing seventh in 22.42.

Marie-Josee Ta-Lou, the Ivory Coast’s world 100 and 200m silver medallist, dropped off the gold standard that she has enjoyed for most of this season as she finished fifth in a season’s best of 22.34.