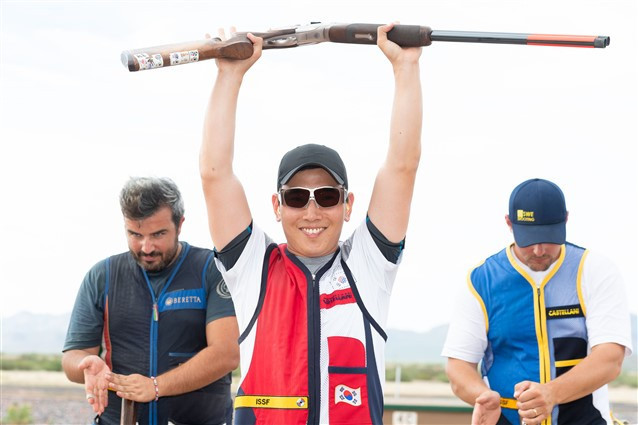 South Korea's Lee Jongjun won his first international medal in the men's skeet final at the International Shooting Sport Federation (ISSF) World Cup event at Tucson, Arizona - a gold - before taking aim at the world title that will be up for grabs in his home country next month.

The 28-year old shooter secured his breakthough victory at the sixth and final Shotgun World Cup event of the season with a final score of 54 hits, after leading throughout the match.

"It feels amazing, and I am definitely hungry for more medals," the South Korean athlete said.

"In less than two months, the ISSF World Championship will be held in my country, in Changwon.

"I am looking forward to that.

"I am aiming at the world title."

Lee had finished the qualifications top of the leaderboard with 123 hits.

When the final started - with scores being set back to zero - Lee missed a clay on his very first station, but then concentrated his efforts.

The Korean athlete shot head to head with Italy's Giancarlo Tazza, who finished in second place and claimed silver with 53 hits.

Lee was no stranger to the Tucson Trap and Skeet Club, having recorded his best World Cup finish -  fifth place - at the venue in 2012.

"I can't believe that I won this competition," said Lee, currently ranked 22nd in the world, and whose best World Cup placement this year has been a sixth place at Changwon, where the World Championships will start on August 31.

"This range is amazing, yet it's challenging.

"The background is quite difficult to read, and it requires a lot of concentration to see the targets against it.

"I did a lot of visualization exercises, before and during the match, and that helped me on the way to the top."

Competition continues with the women's trap competition, the final of which will take place on Monday (July 16).