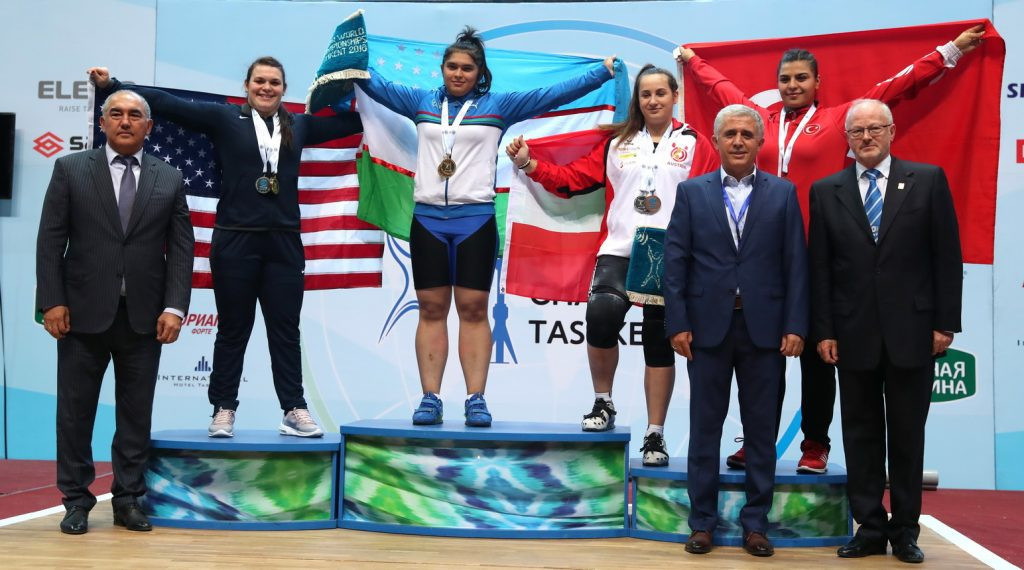 Despite finishing fifth in the snatch with a lift of 97kg, the 2018 Asian youth champion won the clean and jerk with 128kg for an unrivalled total of 225kg at the Uzbekistan Sport Complex.

The United States' Juliana Riotto came out on top in the snatch with 99kg but had to settle for second place overall with 224kg after ending up third in the clean and jerk with 125kg.

Riotto managed the same total as Austria's Sarah Fischer, the runner-up in the snatch with 98kg and the clean and jerk with 126kg, and took the silver medal by virtue of the fact she completed the winning lift first.

Fischer's bronze was her country's first medal in the history of the IWF Junior World Championships.

It could have been even better for the 2018 European and 2017 youth world silver medallist, who failed with her final snatch lift at 100kg and last clean and jerk attempt at 129kg.

Turkey's Tuğçe Boynueğri was the snatch bronze medallist with 98kg having lifted the weight after Fischer.

Uzbekistan's two other overall gold medals have come courtesy of Kumushkhon Fayzullaeva in the women's 63kg and Adkhamjon Ergashev in the men's 62kg.

In the men's 105kg event, Georgia's Irakli Chkheidze secured a clean sweep of the gold medals.

Home favourite Akbar Djuraev was the overall runner-up with 369kg having come second in the snatch with 167kg and the clean and jerk with 202kg.

He finished fourth in the snatch with 160kg, which was 2kg less than bronze medallist Amir Azizi of Iran, and third in the clean and jerk with 200kg.

A total of 246 athletes from 49 countries are competing at the 2018 IWF Junior World Championships, scheduled to conclude tomorrow with the men's over-105kg and women’s over-90kg categories.