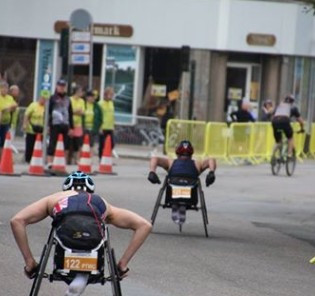 Paratriathlon racing in the duathlon, and age group races in the duathlon sprint were the order of the day at the International Triathlon Union’s Multisport World Championships taking place in and around Odense in Denmark.

Around 3,000 athletes representing 48 countries are participatiing in the five disciplines of duathlon, cross triathlon, aquathlon, aquabike and the showcase long distance triathlon in what is the second staging of this concept since its debut in Canada last year,

The duathlon consisted of a 10 kilometres run followed by a 36km bike ride and then a 4.9km run as the event begun.

Sprint duathlon distances are typically a 5km run, followed by a 20km bike ride, and then a 2.5km run.

In the PTWC class, Antonio Muller took first place in a time of 1 hour 03min 57sec after coming from behind to make up almost three minutes on second-placed Briton Mark Conway during the bike ride.

“One down, three to go!”. That was the first words of Marianne Hüche after claiming the world championships title in Para Duathlon, who’s chasing the Multisport Legend title on home ground! #HighFiveFyn @worldtriathlon #sporteventdk #sporteventfyn pic.twitter.com/JGjOMtLebv

The PTS3 men’s title went to Joaquin Carrasco of Spain, who finished in 1:32:00.

At the young end of the age group racing, Maria Paula Tobias Espinosa of Mexico won the 16-19 female AG category in 1:06:25, while the male 16-19 title went to Patton Sims of the United States, who finished in 59min 47sec.