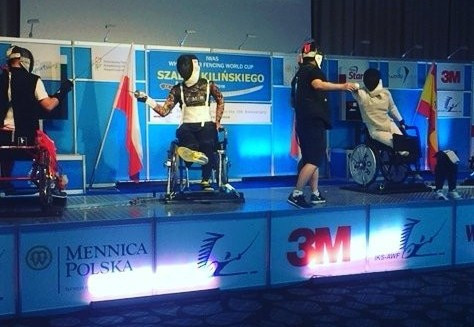 It came on a day dominated largely by sabre competitions at the Polish capital’s Airport Hotel Okęcie.

Yevheniia Breus triumphed in the women's sabre A division with a 15-5 final victory over Hungary's Eva Andrea Hajmasi.

Ukraine's Nataliia Morkvych won a bronze medal along with Sabrina Poignet of France.

Serhii Shavkun then added the men's épée C spoils in the final event of the day.

Li Hao of China won the gold medal in the men's sabre A class with a 15-9 final win over Edoardo Giordan of Italy.

He beat Timur Khamatshin of Russia 15-8 as Yannick Ifebe of France and Pierre Mainville of Canada won bronze medals.

Irma Khetsuriani of Georgia claimed the day's other gold medal.

She triumphed in the women's sabre B final 15-10 against Thailand's Saysunee Jana.