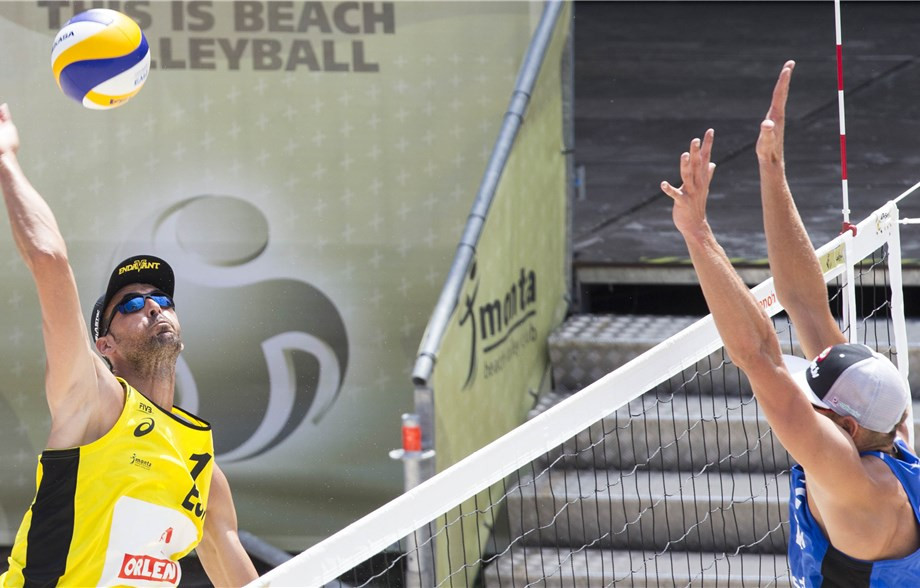 Two Polish teams did make it through to the second round on home soil though.

In the women's tournament the second round was played today to decide the quarter-finals, with two United States pairs and two Brazilian pairs among the eight teams making it through.

Brittany Hochevar and Kelly Claes from the US beat Russia's Svetlana Kholomina and Nadezda Makroguzova in their second round match, 21-19, 21-19.

Hochevar said afterwards that they had a clear game plan and it paid off.

Hard-fought win against tough Russians and Hochevar and Claes 🇺🇸 advance to the quarterfinals of the #WorldTourWarsaw on the #BeachWorldTour!@USAVBeach #beachvolleyball pic.twitter.com/SPiA7NlQiJ

"We just stayed really focused and executed the plays at the right times, cause that's a very tough Russian team."

The other US pair to make it through did so by winning three matches today.

Nicole Branagh and Kerri Walsh Jennings beat the Chinese pair of Xinxin Wang and Bing Bai in their final pool game, 21-12, 21-12, before knocking out their compatriots in round one Sara Hughes and Summer Ross.

In the second round they then faced the third seeds Maria Antonelli and Carolina Solberg Salgado from Brazil, though they managed to win that too, 21-15, 21-18.

One of the Brazilian pairs that did make it through were the second seeds Barbara Seixas De Freitas and Fernanda Alves.

They beat the German pair of Victoria Bieneck and Isabel Schneider in the only match of the second round to go to three sets.

That result means the Poles have no home teams in the quarter-finals.

Tomorrow will see the men’s second round go ahead while the women battle it out in the quarter-finals.

The first match on will be the Brazilian pair of Vitor Goncalves Felipe and Evandro Goncalves Oliveira Junior, up against the Norwegians Anders Berntsen Mol and Christian Sandle Sorum in the men's second round.