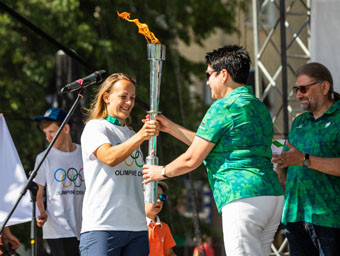 The Mayor of Panevėžys, Rytis Mykolas Račkauskas joked that it felt more like 51,000.

On top of that 150 people had a go at team-building activities and the finals of the Lithuanian School Games attracted 500 pupils.

It is thought all the participants together brought around 10,000 family and friends with them.

Lithuanian National Olympic Committee President Daina Gudzinevičiūtė claimed that, thanks to the event, Olympic, Paralympic and even non-Olympic sports gained "lots of popularity".

"Together with the residents of Panevėžys we managed to prove that we can achieve everything we want to," Gudzinevičiūtė, an Olympic gold medallist in shooting at Sydney 2000, said.

Around 30 Olympians who took part tried new events themselves.

Boxer Tadas Tamašauskas, for example, had a go at Lithuanian wrestling.

"The most exciting of them was an opportunity to ride a sports horse," she said.

"This time I did not do a time challenge, instead, I simply enjoyed the pleasure of engaging in sports."