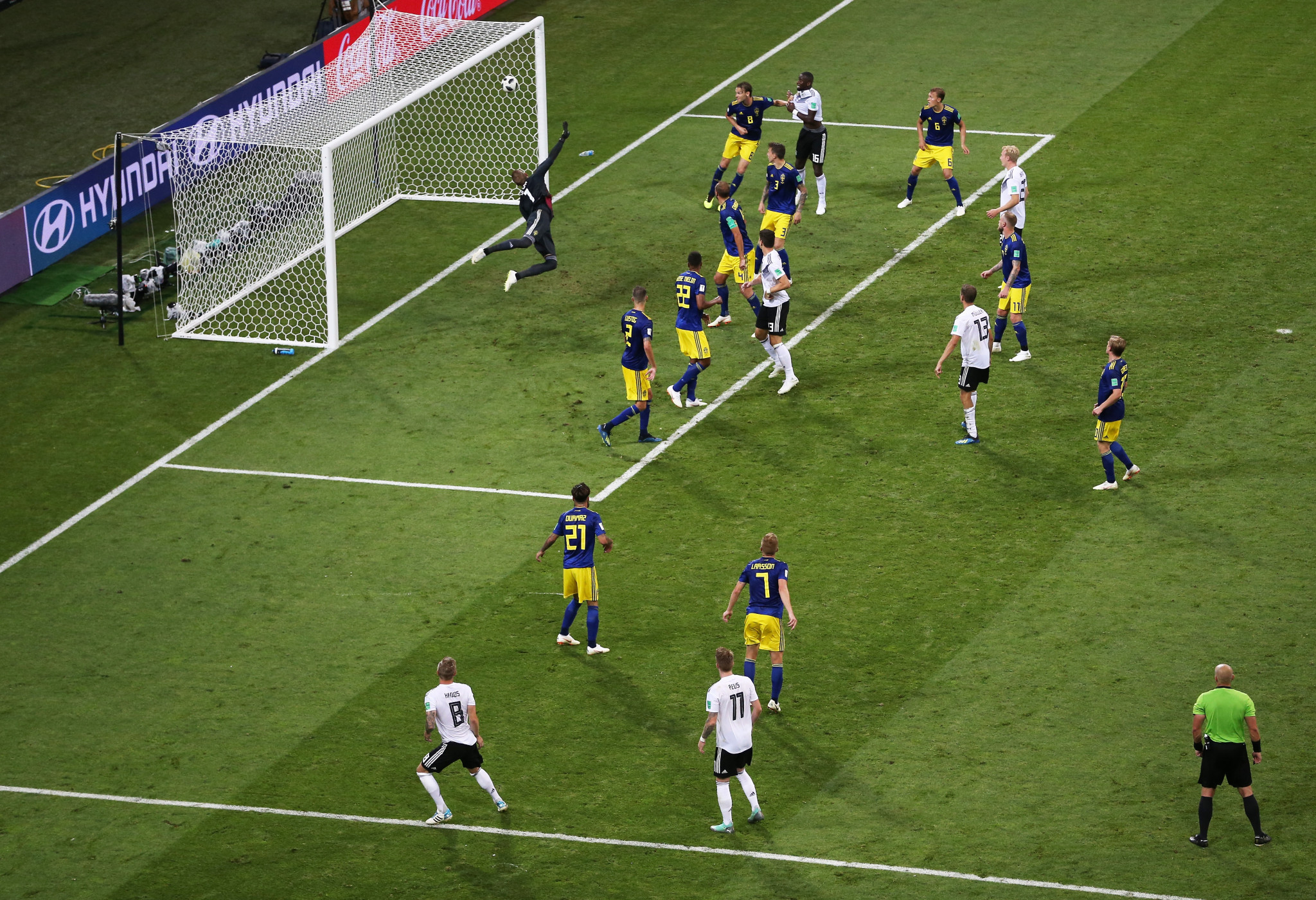 Toni Kroos curled in an injury time winner against Sweden to hand Germany’s hopes of defending the FIFA World Cup a major boost in Russia.

Germany’s hopes of becoming the first side to retain the World Cup since Brazil in 1962 appeared to be teetering as the match entered added time with the scores locked at 1-1.

From the left of the penalty area, Kroos bent a free-kick into the top corner of the Swedish net to the delight of Germany’s fans at the Fisht Olympic Stadium in Sochi and to the dismay of their Group F rivals.

Kroos’ strike more than atoned for the midfielder’s mistake in the first half, where his concession of possession allowed Sweden to carve out an opportunity for Ola Toivonen.

The experienced forward broke into the German box and superbly chipped over goalkeeper Manuel Neuer to give Sweden a 32nd minute lead and raise the possibility of the defending champions making a shock exit after two defeats.

While Germany had dominated first half possession, Sweden created the better chances, with a strong penalty claim by Marcus Berg having been turned down and a late header from the forward requiring an impressive save by Neuer to keep the score at 1-0.

Germany, seeking to avoid an exit in the first round for the first time since 1938, began the second half in impressive fashion.

Marco Reus bundled in a Timo Werner cross three minutes into the half to level the scores and begin an onslaught to the Swedish goal.

Sweden were able to hold off their opponents and threated themselves as the half progressed, with their hopes gaining a further boost when Germany’s Jerome Boateng was sent off for a second bookable offence.

Late drama would unfold as substitute Julian Brandt hit the post for Germany in the dying minutes, before German pressure told with Kroos’ 95th minute winner.

The result saw Germany join Sweden on three points in the group, but the latter face the tough test of group leaders Mexico in their final match.

Mexico backed up their shock victory over Germany in their opening match of the tournament by overcoming South Korea 2-0.

Carlos Vela gave Mexico a first half lead in Rostov-on-Don from the penalty spot, stroking in after Jang Hyun-soo's handball in the 26th minute.

Javier Hernandez doubled their advantage after the break, finishing off a counter attack, led by the dangerous Hirving Lozano.

The strike was Hernandez’s 50th for Mexico and appeared to have sealed their victory.

Asian Footballer of the Year, Son Heung-min, gave South Korea faint hope of a comeback with a superb finish from outside the box in injury time, but it proved too little, too late to prevent defeat.

All four teams still have the chance to progress from Group F, with Mexico only requiring a point against Sweden to finish top of the group.

They could still miss out on a place in the last 16 should they lose to Sweden and Germany claim victory over South Korea.

South Korea would require a shock victory over Germany, coupled with a Mexico victory over Sweden to have any hope of progression.

Belgium closed on a place in the knock-out stage with a comfortable victory over Tunisia in an entertaining Group G match at the Spartak Stadium.

An early Eden Hazard penalty and composed Romelu Lukaku strike gave Belgium a 2-0 lead after 16 minutes, but poor defending from a free kick allowed Dylan Bronn to head Tunisia back into the match two minutes later.

Lukaku added his second on the stroke of half-time after an incisive pass from Thomas Meunier.

His tally was equalled after the break by Hazard, who controlled a superb Toby Alderweireld pass before poking Belgium into a 4-1 lead.

Should England beat Panama tomorrow both their and Belgium’s places in the last 16 would be confirmed.