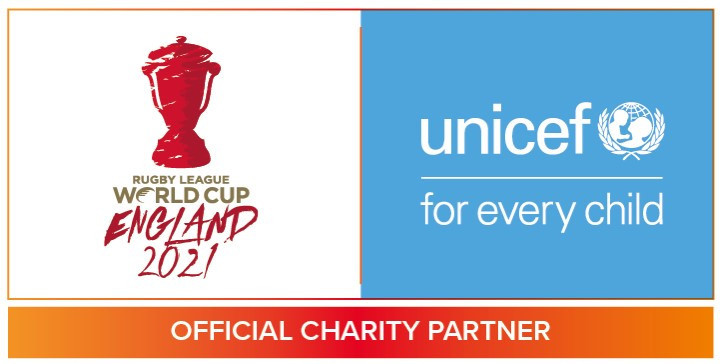 UNICEF UK have been named the official charity partner for the Rugby League World Cup 2021 (RLWC2021) in England, it has been announced.

The tournament organisers claim the partnership  with UNICEF, who work with disadvantaged children in 190 nations across the globe, will raise awareness and funds for the charity by using "the power of sport".

It is promised the charity will work closely with tournament partners to deliver core messages and engagement to a global audience, as well as raising funds for vital projects supporting children in the UK and internationally.

Chief executive of RLWC2021 Jon Dutton said: "Working with UNICEF UK will give the sport a powerful platform to help improve economic and social well-being.

"UNICEF is a true global brand and we welcome them to the Rugby League World Cup family who will embrace their goals and programmes with open arms."

Dutton continued that he hoped the partnership will help RLWC2021 leave "an impactful legacy".

A similar partnership between UNICEF and the 2014 Commonwealth Games raised £6.5 million ($8.5 million/€7.5 millIon) funding programmes that helped 11.7 million people, it is claimed.

"They allow us to use the power of sport to shine a light on children’s rights and raise awareness about the challenges that children are facing in the UK and all around the world," he said.

"We are incredibly proud to be the official charity partner of the Rugby League World Cup 2021 and looking forward to working closely with them to raise vital funds for UNICEF;s work to help children right here in the UK and those in danger around the world."

The tournament in three years time will bring the men's women's and wheelchair competitions together in a new first for the sport.

It's hoped the event, which will take place in October and November, will be the most watched World Cup in the sport's history.