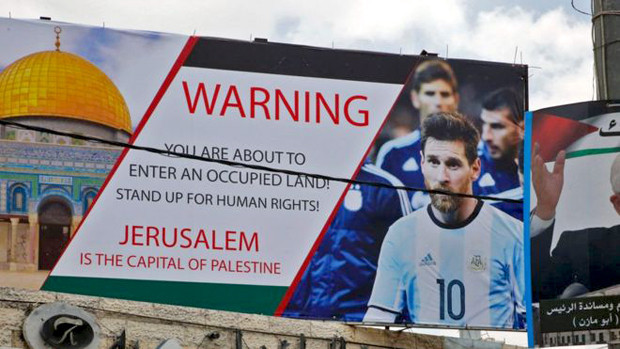 Rajoub, who also leads the Palestine Olympic Committee, called on fans to burn pictures and shirts depicting the Argentinian superstar if he opted to play in a friendly match against Israel in Jerusalem.

The match never took place in the end but a decision to switch it to disputed land in Jerusalem infuriated Palestinians.

Argentina's own Football Federation eventually called it off, despite a specific request for it to go ahead from Israeli Prime Minister Benjamin Netanyahu to his counterpart in the South American country, Mauricio Macri.

FIFA said they were taking action "as a result of his [Rajoub’s] statements, widely reported in the media, with respect to the international friendly match that was scheduled to take place on June 9, 2018 between Israel and Argentina".

Rajoub also suffered a crushing defeat at last week's FIFA Congress in Moscow when he unsuccessfully attempted to force through a change to Article Three of the FIFA Statutes regarding human rights.

His long-winded interjection did not specifically mention Israel but called for human rights violations to be "punishable by suspension or expulsion".

It was rejected by 156 votes to 35 after FIFA advised against it on the grounds that similar requirements are already contained within their rules.

"The ritual repeats itself every time, when Rajoub tries to lead decisions at FIFA against our soccer and the State of Israel," responded Israel Football Federation President Ofer Eini.

"Thanks to correct and intelligent work we are succeeding to explain to our friends in FIFA what truly hides behind the supposedly innocent proposals of someone who has crossed every red line."

Governing bodies, led by the International Olympic Committee, are currently seeking to keep political disputes, such as the one between Israel and Palestine, out of sport.