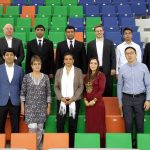 Turkmenistan's capital Ashgabat, asked to host this year's World Weightlifting Championships at short notice, is making "significant progress" towards staging the event from November 1 to 10, it has been claimed.

That judgement was voiced by International Weightlifting Federation officials who concluded their second technical visit to the facilities which were used for the 2017 Asian Indoor and Martial Arts Games.

Ashgabat was awarded the event during the IWF Executive Board last November.

The announcement came after scheduled hosts Lima had agreed to hand the event over "to support the weightlifting family".

"We have seen significant progress in the preparations and we managed to cover all the important areas of the World Championships organisation," Nemeth-Mora said.

"Since practically all nations are required to have a visa to enter Turkmenistan, the hosts undertake to provide free of charge visa on arrival to all participants submitting the required data in time.

"We were also privileged to be received, once again, by Turkmenistan's Minister of Youth and Sport, Dayanch Gurgeldiyev.

"His direct involvement in the Organising Committee is a guarantee that Turkmenistan will stage a high-class event."

The programme of events is awaiting the confirmation of the new bodyweight categories.

The delegation was joined by the IWF's partner Lagardere Sports, represented by its senior vice president and director of media, which enabled conclusive discussions with Turkmenistan's state television regarding the broadcasting of the event.