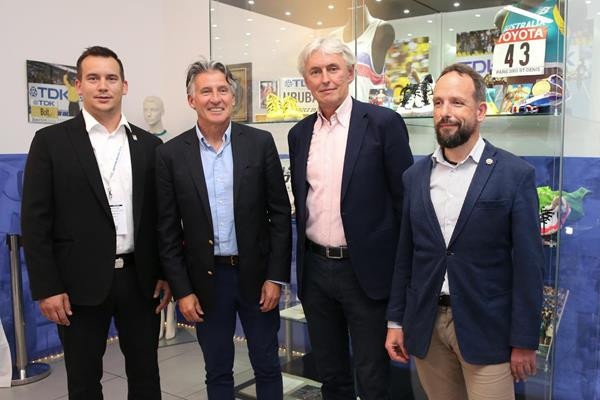 Coe, who was in the Czech Republic to promote this year's IAAF Continental Cup in Ostrava on September 8 and 9, toured the exhibition with Tomas Macura, the Mayor of the city, and Libor Varhanik, the Czech Athletics Federation President.

Valter Bocek, chief executive of this year's Continental Cup, was also in attendance.

The exhibition was entitled "IAAF Heritage World/Continental Cup – 1977 to 2018".

Double Olympic 1,500 metres champion Coe, a multiple world record breaker, has his own memories of the event's precursor, the IAAF World Cup in Athletics.

He competed in the third and fifth editions of the competition, which in 2010 was renamed the Continental Cup.

In 1981 in Rome, Coe pulled on a Team Europe vest and won the 800m in style, taking the lead at 500m and then gliding away from the rest of the field down the home straight before winning in 1min 46.16sec.

On his second appearance in 1989, when the Cup was held in Barcelona, Coe, then representing Britain - who had qualified as an individual team - ran the 1,500m.

He appeared to have been bumped by the eventual winner as the two approached the home straight.

A British appeal against the result - not sought by Coe - was turned down..

"Situated right in the heart of Ostrava, this exhibition is a marvellous opportunity for athletics to directly engage everyday with people as they shop," said Coe.

"Connecting athletics with a public who might never have considered visiting a stadium to watch our sport.

"Here in Ostrava, athletics' rich history is introduced, visitors become acquainted with its heroes and heroines via video, photo and text displays.

"They can view the competition clothing of great champions and watch video of the events in which it was worn.

"They have the opportunity to feel the weight of the hammer and marvel at the height of the high jump world record.

"This is athletics close up, a sport which has excited for millennia."