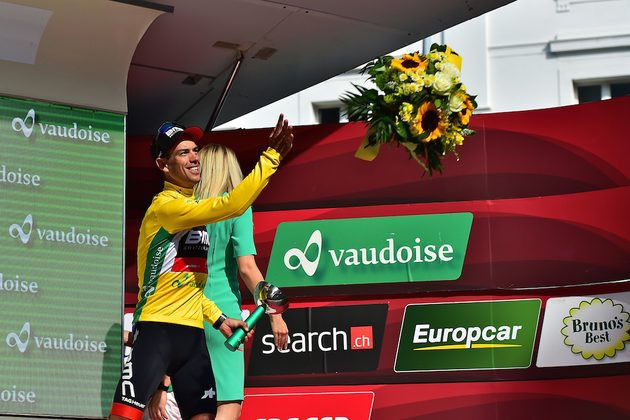 Küng was the only rider to clock a time under 40 minutes on the 34.1 kilometre course.

He finished 19 seconds in front of Søren Kragh Andersen of Denmark in second as he timed in at 39min 44sec.

It was a disappointing day for Nairo Quintana who started off in second overall.

Rather than closing the gap on Porte, the Colombian Movistar rider actually lost 55 seconds on his rival, dropping to third overall as a result.

Maciej Bodnar of Poland and Bora–Hansgrohe set the early benchmark for the day, recording a decent time of 40:10.

He led for some time until stage six winner Kragh Andersen of Team Sunweb powered ahead with a time of 40:03.

It looked like Andersen might well hold on for the stage win, until Küng's very impressive run.

Rather than tiring he looked stronger as his time trial went on, eventually finishing with an unassailable time.

As the overall leader, the Australian Porte went last.

He set a time of 40:48 which was comfortably enough to maintain his lead.

Elsewhere today, Coryn Rivera became the fifth different winner of the Women's Tour after finishing eighth on the final stage in Wales.

The Team Sunweb rider had held the overall lead since winning stage two and finished today with an 11 second lead overall.

The route for stage five saw the riders tackle a 122.6km course from Dolgellau to Colwyn Bay, travelling through Snowdonia National Park.

In a well controlled performance, Rivera's Team Sunweb did not let anyone totally get away from the group, despite several breakaway attempts at different points in the race.

Maaike Boogaard was the first to try and force a gap, but the Dutchwoman, riding for BTC City Ljubljana, was reeled in after just a few kilometres.

A number of further attempts by others in the final 40km came to nothing.

Team Sunweb's efforts to stick to the front meant that after tough riding for more than 120km the race was eventually decided by a sprint finish right at the end.

Finland's Lotta Lepistö of Cervélo–Bigla Pro Cycling was the fastest, repeating her 2016 stage win, while Rivera came home in eighth, comfortably in the knowledge that it was enough to secure her the overall win.