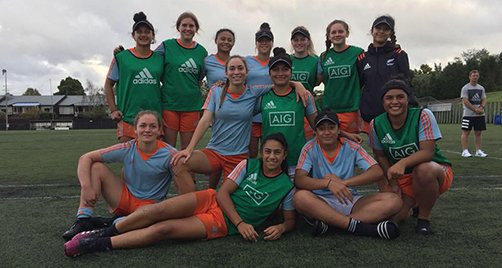 The New Zealand team earned a place at the Games by winning the Oceania Under-18 Sevens Championship in April, beating Australia 21-7 in the final.

The New Zealand Olympic Committee have confirmed their selection, making the team the first from the country to contest rugby sevens competition at the multi-sport event.

"The Youth Olympic Games are part of the pathway to the Commonwealth and Olympic Games and we’re delighted that a new generation of rugby sevens players will have this experience," Kereyn Smith, the NZOC chief executive, said.

"We’re excited about the sporting, educational and cultural opportunities the Youth Olympic Games provide and welcome the players to the New Zealand team."

Victoria Grant, head coach and former Black Ferns captain, claims the team will be targeting winning gold at the Games.

"As a group we worked incredibly hard in the lead up to the Oceania event and that showed with the on-field performance," Grant said.

"To get the confirmation that our team would be included as part of the New Zealand team for the Youth Olympics was incredible.

"We had a wider squad of 20 players that have been training and preparing for this, selecting just 12 was a very difficult task.

"We are confident that we have a team that will push hard for a gold medal.

"Risaleaana and Jazmin are involved with the Black Ferns Sevens team so bring a real level of experience and professionalism to the squad."

Triple Olympic sailing medallist Barbara Kendall will serve as New Zealand’s Chef de Mission for the Games, due to take place from October 6 to 18.

Around 70 athletes are expected to represent New Zealand at Buenos Aires 2018.