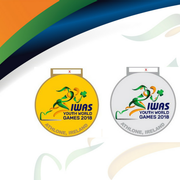 The medals design has been unveiled for this year's International Wheelchair and Amputee Sports Federation (IWAS) Youth World Games in Athlone in Ireland.

The new medals have been revealed with one month to go before the event begins.

The competition logo features on the front.

It depicts an amputee sprinter in full flight coloured in the green, white and orange of the Irish flag.

In a further reference to the host nation, the athlete has a clover as a hand.

"These medals represent a huge amount to the young athletes who will line-up in Athlone," IWAS President Rudi Van Den Abbeele said.

"For many it will be their first major event and a chance to experience international competition for the first time.

"It has the potential to be a defining moment in their careers.

"I wish everyone the very best of luck as they try to reach the podium."

The event, due to take place between July 2 to 5, will see athletes compete in athletics, swimming and table tennis.

Over the years a number of today's well known Paralympians have competed at the IWAS World Youth Games.

They include Australia’s wheelchair racer Madison de Rozario, who broke three junior world records in the 100, 400 and 800 metres at the 2012 IWAS Youth World Games in Olomouc in the Czech Republic.

The youth edition of the World Games has been a fixture of the IWAS programme for more than a decade.

Since the first edition took place in Stoke Mandeville in Britain, the birthplace of the Paralympic Movement, in 2005, hundreds of young athletes have got their international careers underway at the event.