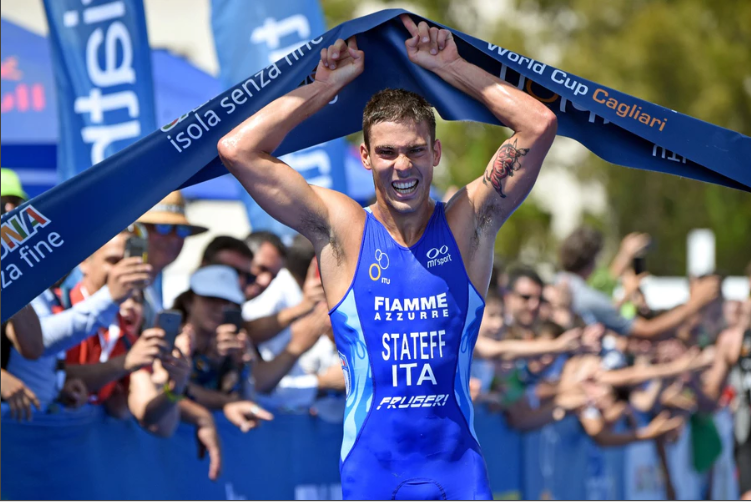 The women’s race saw Perterer catch the United States' Taylor Spivey right on the line to triumph in the most dramatic of fashions.

Both athletes clocked exactly the same time of 1 hour 0min 13sec for the sprint-distance course, which featured a 750 metres swim, a 19 kilometres cycle and a 5km run.

"I didn’t know what I was thinking at the end," Perterer said.

"But I just kept telling myself; you can do this."

Italy’s Verena Steinhauser, who ended up fourth, began to force the pace through the second transition with the Italian crowd powering her on and only Perterer, Lee and Spivey still having enough to go with her.

As the rest of the field became drained by the chase, the four leaders summoned the will for an intriguing final 400m.

Spivey was first to make the charge, only for Perterer to dig deeper still and break the tape first by a fraction of a second.

Australia’s Emma Jeffcoat, who was considered to be among the favourites for victory, had to settle for fifth spot.

This is how close it was for Lisa Perterer to win Austria's first ever Word Cup title #CagliariWC pic.twitter.com/VfH2ilOg5t

In the men’s race, Stateff posted a winning time of 54:45 to beat nearest challenger Hayden Wilde of New Zealand by a margin of four seconds.

Stateff looked somewhat off the pace going into the two-lap 10km run, but as the hill picked off the weaker legs, it was the 24-year-old who began closing in on Wilde and Uccellari, with Britain’s Barclay Izzard also remaining right in the hunt.

With two u-turn bends in the final 200m to contend with, Stateff managed to pull away from Wilde and kick on to secure a brilliant victory.

A lightening run from Britain’s Alex Yee, a full 20 seconds quicker than anyone else in the field, saw him finish in eighth and one place behind Izzard.

Yee was making his return to the World Cup circuit having sustained serious injuries at a crash in Cagliari during last year's event.

He suffered broken ribs, vertebrae and a collapsed lung, but has since fought back to fitness.