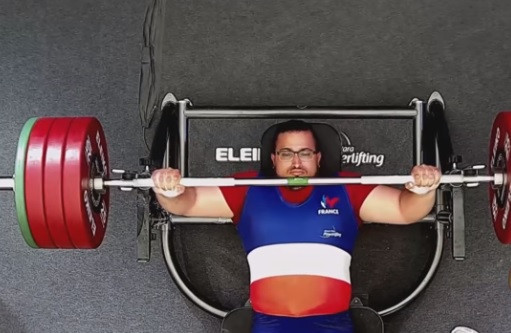 Rafik Arabat of France secured victory in front of a home crowd as he clinched the men's 88 kilograms gold medal at the World Para Powerlifting European Open Championships.

Arabat finished 1kg ahead of nearest rival Evanio Da Silva of Brazil with a best lift of 196kg at the Fiolet Weightlifting Room in Berck-sur-Mer.

Farhod Urmizakov of Uzbekistan was third in the open category but took continental silver on 180kg.

The European bronze medal was secured by Janne Piipponen of Finland, who managed a best attempt of 176kg.

Greek powerlifter Gkremislav Moysiadis also claimed a narrow victory as he topped the podium in the men's 80kg division.

Moysiadis' best effort of 186kg was just 1kg heavier than Yurii Babynets had managed, meaning the Ukrainian athlete had to settle for the silver medal.

Commonwealth Games silver medallist Louise Sugden continued Britain's success at the event as she sealed the gold medal in the women's 86kg category.

Sugden finished streets ahead of the rest of the field after she lifted 108kg, 13kg more than silver medallist Maria Alcoba Membrilla of Spain.

The bronze medal in both the open and continental classes was earned by Lyazzat Zhakupova of Kazakhstan.