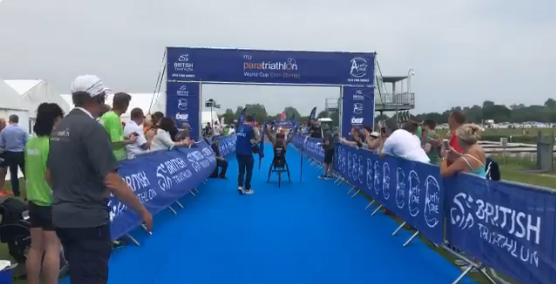 Townsend prevailed with a time of 1 hour 43sec at the venue located in and around Dorney Lake, which hosted the London 2012 Olympic rowing competition.

There was also success for Britain in seven of the other 10 events.

Paralympic champion Lewis posted an unrivalled time of 1:06:37 in the PTS2 with The Netherlands' Maurits Morsink second in 1:08:50 and France's Jules Ribstein third in 1:09:59.

On the women's side, Britain's Hannah Moore was the only competitor in the PTS4 event and she posted a time of 1:15:48.

Lauren Steadman led a British one-two in the PTS5 competition, finishing in 1:08:06 to beat Claire Cashmore by a margin of 3:00:01.

Britain's one other female winner was Alison Patrick, who secured top honours in the PTVI event at the expense of Annouck Curzillat with a time of 1:07:35.

Germany's Nora Hansel was the only competitor in the women's PTS3 event and finished in 1:25:23.

She clocked a time of 1:26:58 to beat sole challenger Veronica Yoko Plebani of Italy by 46 seconds.

The next leg of the ITU Paratriathlon World Cup series is due to take place in Besançon in France from June 16 to 17.