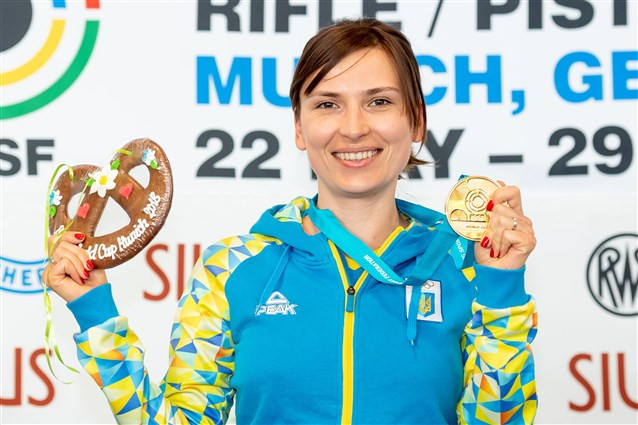 The Athens 2004 Olympic champion, who also secured a bronze medal in the women’s 25m pistol event on Friday (May 25), scored an unrivalled 240.1 points at the German city’s Olympian Schiessanlage.

"My aim is now the World Championship.

"I have been chasing that title for many years."

"It feels amazing to be back," she added.

"I have been away for a while, but now I am again on the podium, with my six-month-old baby travelling with me and giving me a lot of motivation.

"To be a mother and a professional athlete is not easy.

"At the same time, I really wanted to come back as I was missing this atmosphere and the competition."

In the women’s 50m rifle three positions event, Iran’s Elaheh Ahmadi secured a surprise victory with a total of 455.4 points.

The 35-year-old, ranked 81st in the world, beat China’s Chen Dongqi to the gold medal by a margin of 1.3 points.

Ahmadi had never won a World Cup gold medal in the event prior to today.

The previous best result of her career, a third-place finish, dated back to 2010 when she finished on the podium at the ISSF World Cup in Beijing.

Chen and Zhang, the Rio 2016 Olympic silver medallist, had equalled the world record earlier today as they scored 1,180 points in qualification.

Furthermore, Zhang had equalled the same record during yesterday’s eliminations.

The 21-year-old also won the equivalent ISSF World Cup event in Fort Benning in the United States earlier this month.

His victory today came after a problem with the range's electronics caused a one-and-a-half hour delay.

Reigning Olympic champion Christian Reitz, ranked first in the world, finished in sixth and last place today to the disappointment of the locals.

With eight out of the 10 events completed, China stand atop the overall medals standings with three golds, four silvers and two bronzes.

Action in Munich is due to conclude tomorrow with finals scheduled to take place in the 10m air rifle mixed team and 10m air pistol mixed team events.