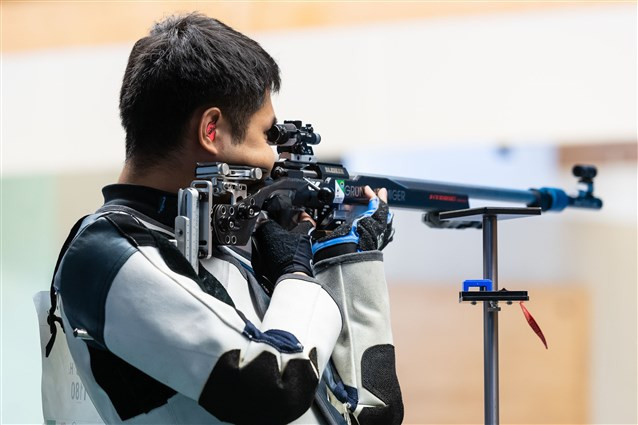 Along the decisive elimination phase, Yang fired three times in the 10th ring, successfully defending the top position and pocketing the gold medal with a score of 465.3 points at the German city’s Olympian Schiessanlage.

He had started with three great rounds in the kneeling position, in which he scored a total of 156.8 points, and then shot with excellent consistency in the prone position that followed.

After 30 shots, Yang had a 1.6-point advantage on Russia’s Sergey Kamenskiy, a gap that the Chinese shooter increased to 1.7 after the first two standing series.

From there, the 22-year-old went onto seal the first gold medal of his career in the event.

"I’m extremely happy that I finally won my first gold in the three positions event," Yang, who also set a qualification world record in the elimination phase with 1,187 points, said.

"It’s been such a pleasure to compete along these experienced and talented shooters."

Kamenskiy ended with 463.4 points to finish second and win his fourth World Cup medal in the event.

The podium was completed by Italy’s Marco De Nicolo with 447.7 points.

Another world record was set in the men’s 10m air pistol event as Ukraine’s Oleh Omelchuk climbed atop the podium with 243.6 points.

It beat the previous mark by 1.3 points.

Omelchuk moved into top position at the end of the second five-shot series.

The 35-year-old then extended his advantage with a 10.3-10.8 points combination and defended himself from a comeback of Germany’s Christian Reitz.

Despite firing three times inside the ninth ring and once inside the eighth, Omelchuk maintained his lead until the end of the match.

Reitz followed in second place with 242.4 points, adding a second silver medal to the one he won at this year’s opening ISSF World Cup in Guadalajara in Mexico.

The bronze medal went to China’s Pu Qifeng, who stepped onto an ISSF podium for the first time since winning two bronzes at his home World Cup in Beijing in 2014.

The 21-year old, who finished 17th on her ISSF World Cup series debut in South Korean city Changwon in April, scored 31 hits to finish atop the podium.

Yao managed 29 hits to collect her second World Cup medal of the season, following the bronze she won in Changwon.

Third position went to Athens 2004 Olympic champion Olena Kostevych of Ukraine, returning to an ISSF World Cup podium for the first time since 2016.

The 33-year-old amassed 24 hits to hold off Russia's Vitalina Batsarashkina, the fourth-place finisher with 21 hits.

By coming first and second respectively, Xiong and Yao have sent China to the top of the medal standings.

The country now has two golds, two silvers and one bronze after two days of competition.

Action in Munich is due to continue tomorrow with the men’s 10m air rifle final scheduled to take place.