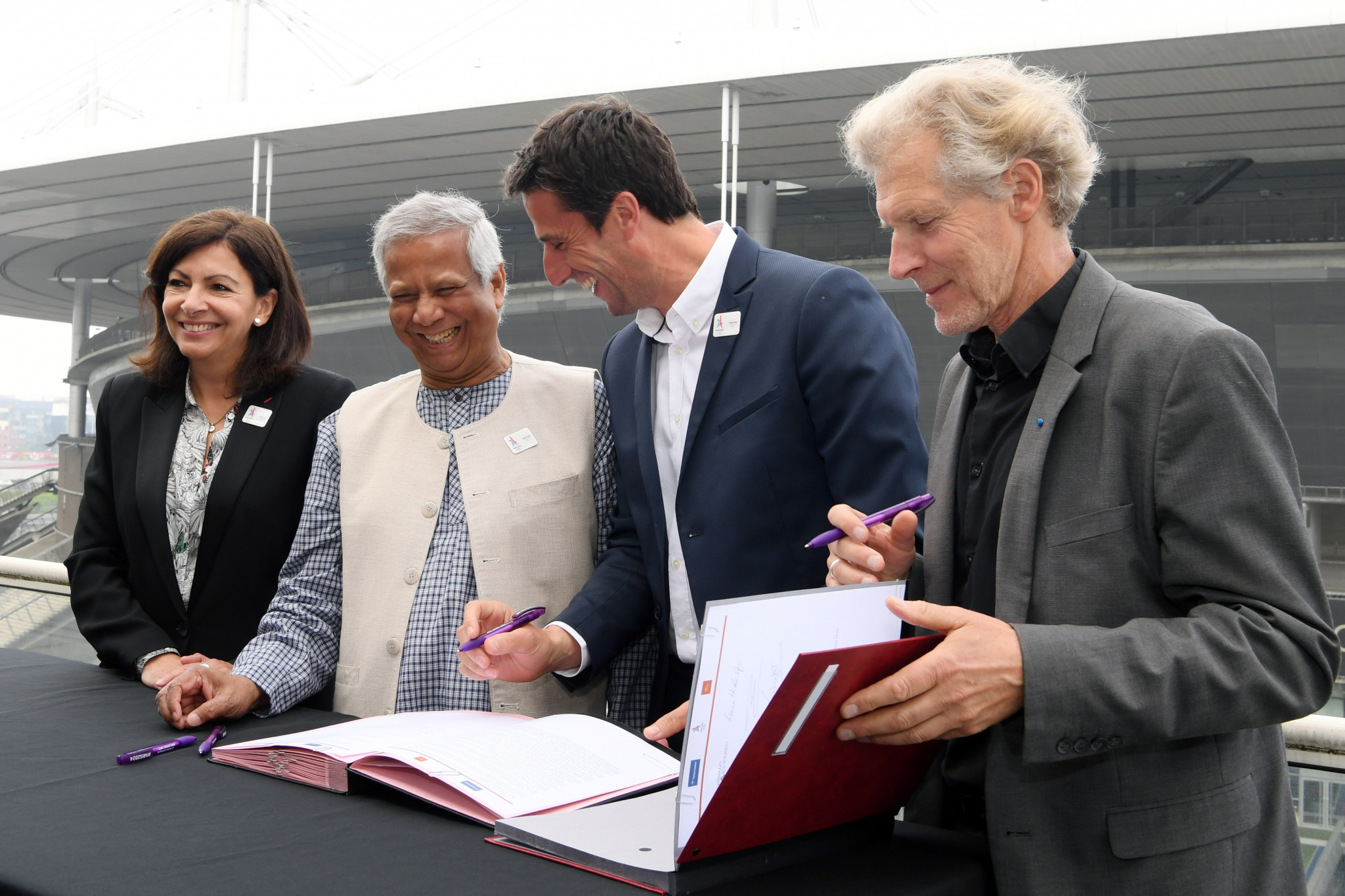 Paris 2024 have partnered with a range of organisations based in the capital city as part of an agreement to stage the "most socially responsible Olympic and Paralympic Games".

The agreement, signed today in the Plaine Commune agglomeration at the heart of the Seine-Saint-Denis department, involved Paris 2024 and city authorities as well as the Yunus Centre and Les Canaux.

The Yunus Centre is a Paris-based global resource centre founded by 2006 Nobel Peace Prize winner Muhammad Yunus while Les Canaux is billed as the city's "hub and agency for social innovation and business".

Parties have pledged to attempt to achieve a "triple zero" goal of zero poverty, unemployment and carbon.

Paris Mayor Anne Hidalgo and Organising Committee chief Tony Estanguet were among those present alongside Yunus himself, who gave the keynote address at the 2016 International Olympic Committee Session in Rio de Janeiro.

French Sports Minister Laura Flessel and Ile-de-France region President Valérie Pécresse were among others in attendance.

The shared ambition of all parties involved in the new agreement is to "create a bridge between the world’s greatest sporting event, to be staged in France in 2024, and the emerging world of social entrepreneurship and the circular economy throughout Greater Paris", announced a statement afterwards.

"The agreement is intended to bring together all stakeholders of the social economy in order to prioritise the social integration of people from less advantaged communities; to create significant employment opportunities for vulnerable and hard-to-reach groups; and also to contribute to economic development by encouraging and supporting social entrepreneurship initiatives."

"We're really excited to bring our partners together, alongside Professor Yunus, to make Paris 2024 a catalyst for progress far beyond sport," said Estanguet today.

"This agreement is a great example of our ambition to ensure that France's biggest sports event is also a project that will drive real benefits for our country and our citizens.

"The work that we started during the bid, together with all our founding members - the City of Paris, the Ile-de-France region, the State, the French National Olympic and Sports Committee, the French Paralympic and Sports Committee - and also with the local authorities, such as the departmental council of Seine-Saint-Denis, is allowing us to start delivering the legacy of Paris 2024 from today, just as we had committed.

"The Games must be an engine of change and a springboard for this emerging economy.

"We are responsible for ensuring that everyone enjoys the opportunities."

Paris' well-publicised commitment towards wider social goals was credited as a major reason for the enthusiastic support of an initially sceptical Hidalgo while also keeping public support for the Games high at a time where no other European Olympic bids have proved successful.

"We share an ambition with Muhammad Yunus to stage the first fully inclusive Olympic and Paralympic Games in history," added Hidalgo.

"This is not simply a soundbite.

"Above all else, these Games must bring benefits to the host communities and their residents.

"The question of employment is clearly central to the legacy that we plan to create.

"Our social integration clauses offer an effective and proven tool to achieve this.

"We will implement them at an unprecedented level in the context of the Games: 10 per cent of employment hours created will be reserved for residents of less advantaged neighbourhoods, people in long-term unemployment, workers with disabilities and other special needs groups."