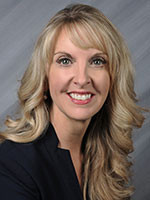 Perry's claim was made in an opening statement published before tomorrow's United States House of Representatives hearing on the abuse scandals rocking American sport.

She will speak as a witness at the hearing, called "Examining the Olympic Community's Ability to Protect Athletes from Sexual Abuse".

It will focus on whether there are adequate safeguards in place to guard against the abuse of young competitors.

USA Taekwondo's executive director Steve McNally and Shellie Pfohl, the President and chief executive of the US Center for SafeSport, are the final witnesses.

Nassar has now been sentenced to up to 175 years in prison for abusing dozen of athletes including US Olympians.

Both the USOC and USA Gymnastics have faced intense criticism for their handling of the affair and questions about what they knew and when.

Perry started in her role in December after replacing Steve Penny, who resigned amid the crisis.

"My singular goal - and the reason I accepted this mission - is to create a supportive and empowering culture that helps our athletes achieve their gymnastics dreams in a safe environment," said Perry in her opening statement.

"First, I want to apologise to all who were harmed by the horrific acts of Larry Nassar.

"I was in the courtroom to listen to the incredibly courageous women explain in vivid and painful detail the damage he did to their lives.

"Their powerful voices will not be forgotten.

"I commit to you that I will keep their words and experiences at the core of every decision I make, every day, as the leader of this organisation.

"Their stories have broken my heart, but also strengthened my resolve.

"Let there be no mistake; those days are over.

"USA Gymnastics is on a new path, with new leadership, and a commitment to ensure this never happens again.

"Since December 2017, we have embarked on a mission to implement a culture that puts athletes first.

"To that end, we are working hard to regain the trust and confidence of our athletes, their families, and all who are a part of the gymnastics community."

It was revealed yesterday that Olympic swimmer Ariana Kukors Smith has filed a lawsuit against USA Swimming, alleging the governing body knew her former coach sexually abused her as a minor and covered it up.

USA Taekwondo and USOC have also been accused of "sex trafficking" in a lawsuit with allegations ongoing against double Olympic champion Steven Lopez and his brother Jean.

Allegations have also been made against USA Volleyball coach Rick Butler.

"I know that we can do better, we will do better," said Lyons in her opening statement.

"When I accepted this role, I announced a series of initiatives to strengthen our handling and response to issues of abuse and address other structural weaknesses.

"We committed to providing funding and resources for gymnasts, and athletes from other sports, affected by abuse. We committed to doubling the Olympic Committee’s funding for the Center for SafeSport, enabling it to hire more investigators and resolve cases more quickly, while also supporting its important efforts to educate athletes and deter abuse before it occurs.

"We announced a review of our governance structures and SafeSport procedures to ensure we have the ability to act quickly and decisively when necessary to protect athletes.

"We committed to strengthening the voices of the athletes in our community, including in the operations of the Olympic Committee."

The USOC announced the appointment of Wendy Guthrie as their senior director of athlete safety yesterday.

They also confirmed a payment of $1.3 million (£967,000/€1.1 million) to the Athlete Assistance Fund, established by the National Gymnastics Foundation.