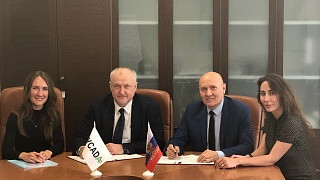 An agreement to help prevent anti-doping rule violations in track and field has been signed by the Russian Anti-Doping Agency (RUSADA) and the Russian Athletics Federation (RusAF).

It also includes a stipulation that doping control officers are given access to all sports venues in Russia.

"The programme sets out cooperation in a number of preventive educational activities, including arranging activities in the regions of the Russian Federation, assistance in investigating potential anti-doping rules violations, and also ensuring access for doping control officials to all sport venues," a statement from RUSADA read.

Both RUSADA and RusAF remain ostracised from their respective international governing bodies amid the fallout from the doping scandal in the country, culminating in Russian athletes being forced to compete as neutrals at the 2018 Winter Olympic Games in Pyeongchang.

The two organisations have failed to adhere to reinstatement criteria established by the International Association of Athletics Federations (IAAF) and the World Anti-Doping Agency (WADA).

Earlier this month, the IAAF threatened to extend RusAF's suspension after it emerged that top race-walkers from the country are still working with disgraced coach Viktor Chegin.

The IAAF warned RusAF their exclusion from the governing body could become permanent if they do not address the remaining problems.

RUSADA has been non-compliant with WADA since November 2015 and have not yet met the outstanding criteria needed to be welcomed back.

These concern an acceptance of the McLaren Report conclusion that an "institutional doping" regime was operated at events including the Sochi 2014 Winter Olympics as well as the opening-up of the Moscow Laboratory for the analysis of samples and electronic data.

Russia has continually stressed it will never publically accept the McLaren Report, however, leading to an impasse between RUSADA and WADA.

There is a practical consequence of its suspension remaining, though, because neither the IAAF nor the International Paralympic Committee can lift their respective bans on Russia until it happens.