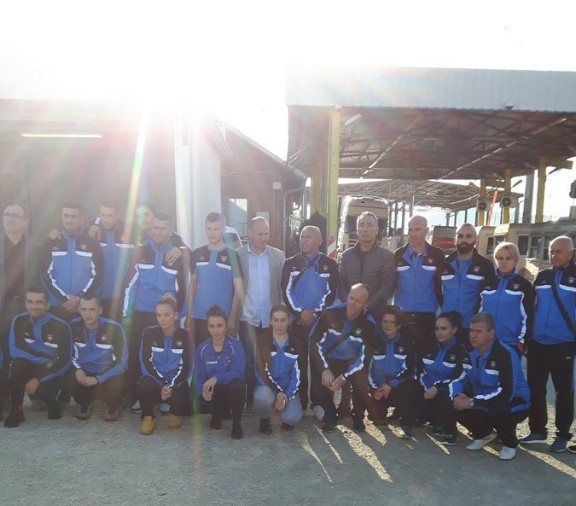 Kosovo's karate team were barred from entering Serbia as they arrived to compete at the European Championships in Novi Sad.

The delegation were prevented from crossing the border in Merdare and were turned away by police amid the ongoing political tension between the two countries after Kosovo declared independence from Serbia in 2008.

They were refused entry a second time by police after making another attempt to cross the border.

Serbia's Government warned yesterday that the Kosovan team would not be able to display any national symbols during the event, which begins tomorrow and concludes on Sunday (May 13).

According to Serbian media, the decision not to allow the Kosovan athletes, coaches and staff to cross the border was made because they were carrying symbols which Belgrade does not recognise.

A picture on the official Twitter feed of the Kosovo Olympic Committee suggests the team wore their own clothes, rather than team kit, when making their second entry attempt.

It has also been claimed that Kosovo had not respected the agreed procedures for official visits to Serbia.

Kosovo Prime Minister Ramush Haradinaj reacted angrily to the Serbian authorities, writing on Facebook that denying the team entry to participate at the Championships was an "unacceptable act that does not contribute to the normalisation of relations between our two states".

"The Serbian authorities were informed by the Kosovo Olympic Committee about this trip and the claim that they have not been informed on time is untenable," Haradinaj added.

In a statement, the Serbian Government's Office for Kosovo confirmed the team would not be able to participate at the event.

In response, the European Karate Federation (EKF) insisted they were "working hard and striving to make sure all athletes are able to compete".

BREAKING: #Kosovo Karate Team are not allowed to entry in Serbian territory. Serbian police turned back our karate delegation in the border of Merdare. Our National Team were going to participate in #European #Karate Championship Novi Sad 2018. @worldkarate_wkf @insidethegames pic.twitter.com/94qeWeRuiq

The decision risks the intervention of sporting bodies who have warned countries not to ban athletes from competing for political reasons.

"Despite Serbia's desire to be a good host to all athletes at the upcoming European Championships in karate, in Novi Sad, athletes from Kosovo and Metohija will not be part of this competition, because for some of them, this time, the sport was of secondary importance," the statement from the Government office read.

Serbia has continually opposed Kosovo being accepted as members of International Federations, including those for athletics and football.

Spain was recently stripped of the 2018 Junior and Under-23 Weightlifting Championships because of the country's political stance on Kosovo.

Kosovo became part of the IOC in 2014 and made their Olympic debut at the 2016 Games in Rio de Janeiro.

"The EKF is making big efforts to guarantee the participation of all the karatekas in the events that are being organised by this federation," an EKF statement sent to insidethegames read.

"Regarding the celebration in Novi Sad of the 2018 Senior Karate European Championships, we are working hard to ensure that all the European athletes take part in this tournament.

"We have 52 of the 53 national federations confirmed at the championships, and we strive to make sure that all the athletes will be able to compete.

"The EKF has always had the policy of making our tournaments as open and accessible as possible and we will continue to endeavour to promote the participation of all the athletes in our events.

"We hope that the 2018 Karate Senior European Championships will run as smooth as possible and we wish all the best to the karatekas participating at the event."