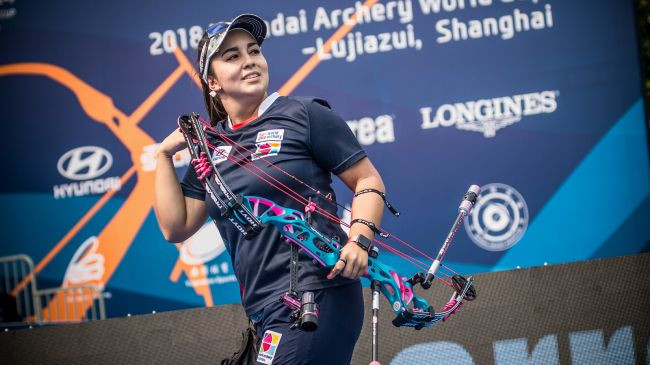 Sara López of Colombia came within one shot of perfection in winning her fourth individual compound title in the Shanghai opener to this season’s World Archery World Cup series.

The 23-year-old scored 149 out of a possible 150 to earn a victory that, under the new World Archery rules, guarantees her a place at September’s World Cup Final at Samsun in Turkey.

The victory at the Yuanshen Sports Stadium also ensured that López, top of the women’s world rankings for a record 1,033 consecutive days until mid-2017, will now regain top spot when the new list is due to be released on Monday (April 30), the day after this event finishes.

Also booking a place in Samsun was South Korea’s Kim Jongho, who followed up two silver medals earlier in the day with victory in the men’s individual compound final.

"The world number one spot comes back to me and I know it will be difficult to maintain it for a long time, but I will work hard. I’m very happy and grateful for all the effort my team does to help me,” López said.

In her fifth consecutive Shanghai final, López beat Chinese Taipei’s Chen Yi-Hsuan with a near-perfect match of 149 out of a possible 150 points; Chen scored 142.

"It’s the first time I’ve shot this high of a score in a final," said López.

"My dream has always been to shoot the 150 - this time it wasn’t possible but it helps me know that I’m capable."

So Chaewon of South Korea beat Jamie van Natta of the United States 146-141 in the bronze medal match to earn her first podium finish on the circuit.

South Korea’s men lost the morning’s compound men’s team final to the US by a point and world pairs champion Kim and partner Choi Bomin fell to Denmark in the mixed team gold medal match.

"I had silver in the team and the mixed team so I felt a lot of pressure, but I’ve practised a lot in Korea for this big win," said Kim.

In attempting to avoid a third silver medal, Kim opened his individual final with a 30-point end, taking a two-point lead against Pagnoni, and never looked back.

In the compound men’s team final the US trio of Reo Wilde, Braden Gellenthien and Kristofer Schaff, ranked world number one, defeated South Korea by scoring 236 points out of a possible 240, including two perfect ends, to finish a point ahead.

Russia claimed the compound women’s team gold medal with a four-point win over Chinese Taipei, with bronze going to The Netherlands, who beat India 223-221.

The new World Archery rule for 2018 offers places in September’s Final in Samsun to stage winners in Shanghai and the three next stops in the Series at Antalya, Salt Lake City and Berlin.