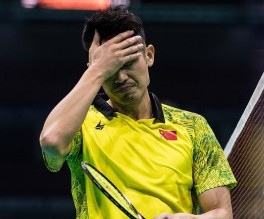 Home favourite Lin Dan has crashed out of the Badminton Asia Championships after suffering a first-round defeat at the hands of Chinese Taipei’s Wang Tzu Wei in Wuhan today.

Prannoy’s team-mates Srikanth Kidambi and Sai Praneeth also joined him in the second round.

There was also a big upset in the women’s singles with fifth seed Nozomi Okuhara of Japan losing 15-21, 21-23 to China’s Gao Fangjie.

Okuhara, who suffered a right knee injury last year, was missing her impeccable control and struggled particularly on the soft shots at the net.

"I could not make the adjustments I was required to, so I kept repeating my mistakes."

Spain’s Carolina Marín, who the event’s venue is named after, is through to round three of the women’s singles competition after the top seed beat France’s Marie Batomene 21-15, 21-12.

Next up for Marín is Switzerland's Sabrina Jaquet following her 12-21, 21-19, 21-16 success at the expense of The Netherlands' Soraya de Visch Eijbergen.

Another home athlete, Beatriz Corrales, was the most notable casualty in the women's draw as England's Chloe Birch defeated the fifth seed 21-16, 21-19.

In the men’s singles, top seed Viktor Axelsen of Denmark overcame Czech Republic’s Adam Mendrek to book his place in the third round.

Standing between Axelsen and a place in the quarter-finals is England’s Sam Parsons, who had a walkover win against Belgium’s Maxime Moreels.

The only men's seed to suffer elimination was seventh-ranked Pablo Abian after the Spaniard lost 9-21, 18-21 to Ireland's Nhat Nguyen.

More than 100 athletes will be seeking to climb atop the podium.