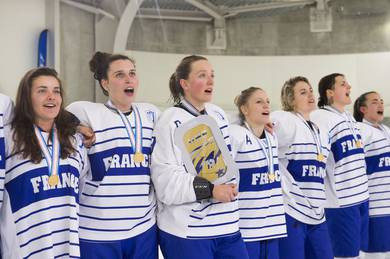 France earned promotion to next year's International Ice Hockey Federation Women's World Championship after they won the Division I Group A tournament in Vaujany.

The French side will compete at an expanded World Championship in Finland, due to feature 10 teams instead of the usual eight.

It will be the first time they have ever participated at the top level of women's ice hockey.

They finished their five-game round robin campaign in their home country with four wins and a loss, ending the event with a 7-1 demolition of Slovakia.

France first beat Denmark 3-2 before they suffered a 2-1 reverse at the hands of Norway, their only defeat of the tournament.

The host nation then overcame Austria 3-2 and Hungary 2-1 before they completed their success with a comfortable win over Slovakia.

"We knew every game would be a challenge, but we were here at home playing in front of family and friends, so we felt we had to win," said goaltender Caroline Baldin.

Baldin added: "We have a lot of solidarity among us, which was the difference."

"We fought hard every game."

"I think the thing we look forward to next year the most is playing against the top teams," added Baldin.

"We’ll be able to see if the gap between us and the top teams is small or not.

"We hope to fight against every team."

Slovakia finished bottom of the group but avoided relegation to Division IB as a result of the expansion of the top tier.