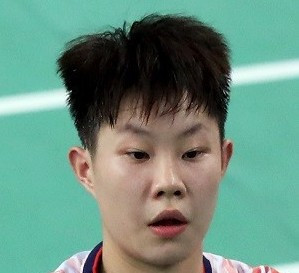 Guo and Liu made a flying start in their match against number one seeds Ronald Ronald and Annisa Saufika of Indonesia at the Agile Arena in this BWF Super 100 World Tour event.

They claimed a 21-17 victory in the first game, during which they were never behind.

Pre-match favourites Ronald and Saufika then fought back in the second game, securing a convincing 21-7 victory to swing the momentum back in their favour.

As was the case with Guo and Liu in the first game, Ronald and Saufika were never behind in the second.

The Chinese pairing, however, managed to remain calm and won a tense final game, during which the lead changed hands on no fewer than eight occasions, by a 21-19 scoreline to ensure they finished top of the podium.

Pre-tournament favourites Han Chenkai and Zhou Haodong also triumphed in another all-Chinese clash in the men's doubles, beating Di Zijian and Wang Cheng by a 19-21, 21-17, 21-16 scoreline.

There was more success for the home nation in the women’s singles as Li Xuerui came from behind to beat Ga Eun Kim of South Korea, the final score reading 16-21, 21-16, 21-18.

There was, however, disappointment for the home crowd in the men's singles as Lu Guangzu failed to build on his opening game victory against Lin Yu Hsien of Chinese Taipei, eventually losing by a 21-12, 12-21, 14-21 scoreline.