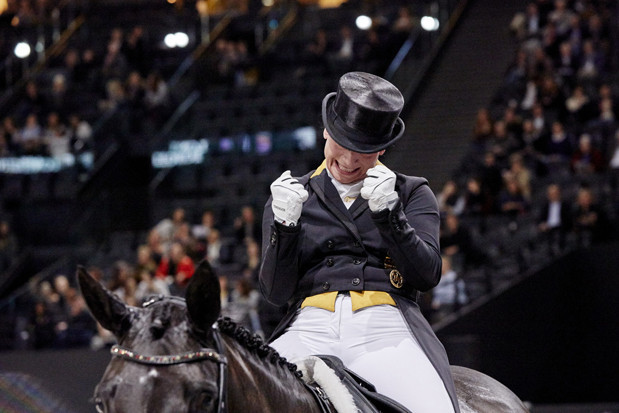 The 48-year-old German, a multiple Olympic and world champion, was put under pressure by last year’s runner-up, winner of the the previous night’s Grand Prix competition on Verdades.

That meant Werth had to put in an extra effort in the concluding freestyle – which she and her horse Weihegold  did, although the result went down to the wire.

"I knew anything was possible," said Graves.

"I knew it would take a score like that to possibly get a win and it was a huge personal best for me."

Werth, however, mustered all the skill and experience of a lifetime to squeeze her rival out of pole position with the winning mark of 90.657 point, thus earning this title for the fourth time in her career.

She described yesterday’s Grand Prix defeat as "motivating", and simply used it to spur herself on to better things with the help of team coach and manager, Monica Theodorescu.

"Like I said yesterday I was not really disappointed or sad, I was just thinking about how I had to prepare for today and how I had to make it better and analyse what went wrong," Werth admitted.

"So Monica and me, we decided to go in the big warm-up arena today, to bring her [Weihegold] forward and to make her free again, and that worked, and today she was the horse I wanted to show yesterday.

"This is life, a lot of people think it’s easy, you win and you win again, but it’s not like that.

"You have to think about it all the time and keep listening to your horse.

"Yesterday was not our day, but today we could solve it.”