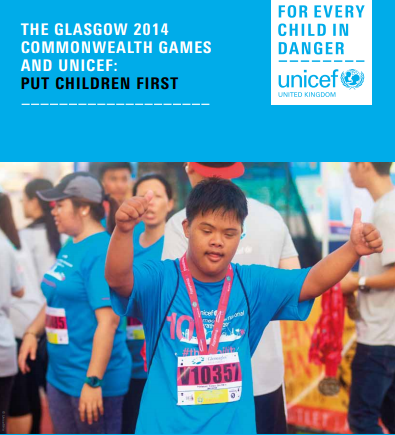 The Commonwealth Games Federation (CGF) have published an impact report detailing how 11.7 million children have benefited from the £6.5 million ($9.1 million/€7.4 million) in fundraising collected at Glasgow 2014.

Alongside UNICEF, the Commonwealth Sports Movement released the initial figures related to their Glasgow 2014 "Put Children First" campaign in November, but they have now published a more comprehensive analysis.

The campaign was launched in 2013, with the partnership with UNICEF featuring prominently during the Queen's Baton Relay.

In one of the most notable parts of the Opening Ceremony at Celtic Park the following year, Sir Chris Hoy called for fans and viewers around the world to make a donation to support programmes for childen.

More than £2.5 million ($3.5 million/€2.8 million) was raised on the night, with further investment coming from the Scottish Government, Comic Relief, UNICEF and other supporters.

The CGF said that programmes have been planned or are underway in all 52 countries of the Commonwealth, with 11.7 million people impacted.

News of the impact comes on the International Day of Sport for Development and Peace today.

"Today's brand new report demonstrates that real change has been achieved, and that we delivered, and will continue to deliver, on our commitment to transform children's lives in every part of the Commonwealth by Gold Coast 2018," said CGF chief executive David Grevemberg, who formerly held the same position at Glasgow 2014.

"On this important day recognising sport for development globally, we also hope our work with UNICEF can inspire and be a catalyst for others.

"We are humbled by what has been achieved and must sincerely thank every athlete, supporter and spectator who generously supported this campaign, donated funds and shared our vision to put children first.

"We proudly aspire to be an international sport leader in human rights.

"This is what the Modern Commonwealth is all about, it's who we are."

More than 540,000 children were aided in Glasgow 2014 host nation Scotland, where the theme focused on children's rights.

An interactive website was launched to help children learn about their rights, while the initiative also formed part of UNICEF UK's Rights Respecting Schools programme.

It is claimed that one in three schools which were part of the programme have been registered on the Child Rights launchpad as part of the scheme, while teachers have reported increased tolerance and acceptance in classrooms.

A second project in Scotland was aimed at nurturing relationships between new parents and their babies with more than 160,000 books given out to aid the process.

Each of the countries had a theme related to local context, ranging from child protection and maternal health to issues surrounding HIV and AIDS, as well as child labour and child marriage.

"I feel proud that UNICEF was able to be part of this historic moment and that the Commonwealth Games continues to set new benchmarks for the standards that sport should uphold," said Mike Penrose UNICEF UK executive director.

"Only by generating awareness, advocating for change and taking action, will we build a better future for our children and the Commonwealth Games is at the forefront of these efforts within sport.

"I would like to express my thanks to the CGF and its partners for providing UNICEF with the unique opportunity to raise the profile of our work to put children first, to make this work a reality, and to continue to partner with UNICEF to drive positive change across the Commonwealth."

Lesotho was among the nations to have the theme of maternal and newborn health, with around one in every 100 women dying during pregnancy or due to birth complications in the African nation.

In an attempt to tackle the figure, with the rate rising steadily since 1990, the Glasgow 2014 programme focused on encouraging women in a targeted district to deliver their babies in health centres.

Community awareness programmes and partnerships with the Lesotho Netball Association helped lead to 36 babies being successfully delivered in these centres, an increase of 260 per cent and with no maternal deaths reported in the district.

A project in Bangladesh sought to tackle the statistic that two in every three women aged between 20 to 24 were married before the age of 18, as well as tackling the issue that one in every 10 children are involved in child labour.

The Glasgow 2014 programme opted to provide financial support for families at risk to help keep their children in school, while local social workers were trained, and young people were encouraged to start small businesses.

No child supported by the programme had to marry, according to the report, with the 900 children supported all still in education.

Any child involved in hazardous labour at the start of the project is no longer involved.

Another project focused on the issue of AIDS in Swaziland, with the African nation having the highest prevalence of HIV in the world.

One in four people between the age of 15 and 49 are claimed to be living with the disease.

It is asserted that students in the 150 schools involved have a greater knowledge about HIV prevention, with students reportedly also changing their behaviour to help reduce the risk of infection.

A further benefit is that more girls are said to be taking part in sporting activity that was traditionally designated for boys and vice versa.

"At the last edition of the Commonwealth Games, I truly believe that - together with UNICEF, our Commonwealth athletes, Commonwealth Games Associations and fans throughout the world - we marked a trailblazing moment in sporting history showing how major sporting events can harness the impactful power of sport to benefit the lives of people," said Louise Martin, CGF President.

"We are so proud of what has been achieved.

"I must thank every athlete, supporter and spectator who generously supported this campaign, donated funds and shared our vision to put children first.

"I know you will agree that now, more than ever, we must commit to ensure that the benefits of a Games stretch beyond the thrilling impact of 11 days of sport."