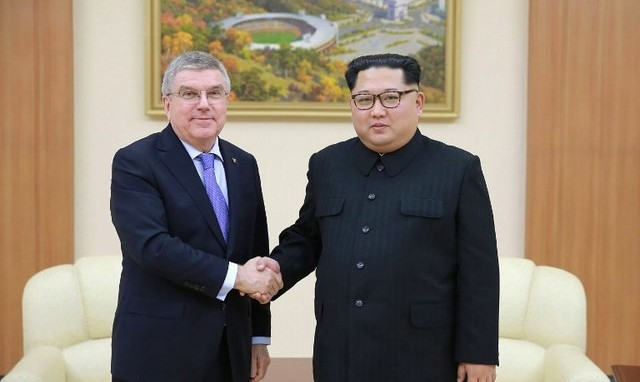 Bach is currently on a three-day visit to North Korea as he seeks to capitalise in the cooling of regional tensions prompted in part by North Korean participation at last month's Winter Olympics in Pyeongchang.

The German met with Kim for a formal 30 minute meeting and the duo also informally spoke while watching a football match at May Day Stadium in capital city Pyongyang.

"They announced to us that they will definitely participate in the Olympic Games Tokyo 2020 as well at the Olympic Winter Games Beijing 2022," Bach told Agence France-Presse afterwards.

Kim also reportedly thanked Bach for "walking the extra mile" to ensure their participation at Pyeongchang 2018.

According to Reuters, Bach said that the IOC would "make a proposal for a potential joint march or potential other joint activities for Tokyo and then maybe also for Beijing at the appropriate time".

Relations between the two countries are currently severely strained.

This is caused by North Korea's nuclear programme under Kim Jong-un and also lingering tension over abductions of Japanese citizens by agents of the North Korean Government which occurred during a period of six years from 1977 to 1983.

A total of 22 athletes from North Korea competed at Pyeongchang 2018 after an IOC-led four party meeting in Lausanne on January 20, which also involved South Korea and Games organisers.

This included a unified women's ice hockey team as well as a joint Korean march under the unified flag at the Opening Ceremony.

A North Korean team has participated at every addition of the Summer Olympics since they boycotted Seoul 1988.

They missed the Lillehammer 1994, Salt Lake City 2002 and Sochi 2014 Winter editions, however, due to not qualifying any athletes.

North and South Korea are due to hold a joint summit on April 27.

United States President Donald Trump is then due to meet Kim before the end of May.