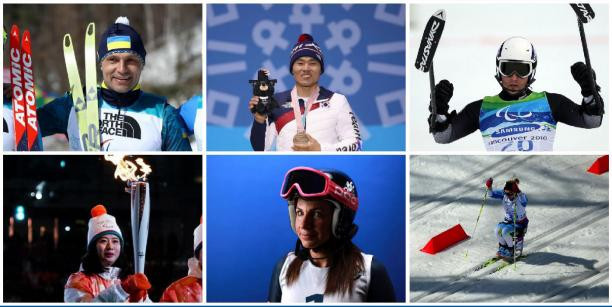 The six finalists for the prestigious Whang Youn Dai Achievement Award, due to be presented at the Closing Ceremony of the 2018 Winter Paralympic Games here on Sunday (March 18), have been announced.

One male and one female athlete who best exemplify the spirit of Pyeongchang 2018 and the Paralympic values will be chosen to receive gold medals weighing 75 grams.

Among the three male finalists are two athletes that compete in both biathlon and cross-country skiing; Ukraine's Vitaliy Luk'yanenko and South Korea's Sin Eui Hyun.

Both have achieved podium finishes at Pyeongchang 2018 with Luk'yanenko claiming gold in the 7.5 kilometres visually impaired biathlon event and Sin securing bronze, the host nation's first and only medal of the Games thus far, in the 15km cross-country skiing competition.

Hall was the bronze medallist in the super combined standing event.

Finland's Sini Pyy, who competes in biathlon and cross-country skiing, is one of the three female finalists along with Alpine skiers Yang Jae Rim of South Korea and Danelle Umstead of the United States.

The award honours Paralympians who "see beyond their limitations" and who have "vision to change the world through sports and the Paralympic Games".

It is named after Dr. Whang Youn Dai, a leading advocate for persons with disabilities for more than 50 years.

The award has been handed out since Paralympic Games at Seoul in 1988 to inspire persons with disabilities and the world to achieve excellence in sports and in life.

The winners are due to be announced tomorrow.

Mentel-Spee was instrumental in getting snowboarding onto the programme for the first time, while Kane, winner of one of Australia's two medals at Sochi 2014 with super combined standing bronze, took on a key leadership role within his country's team.

This came after several setbacks in the team during the build-up to the Games, particularly following the tragic death of Australian snowboarder Matthew Robinson after he crashed during the World Cup Finals in Spanish resort La Molina in February 2014.