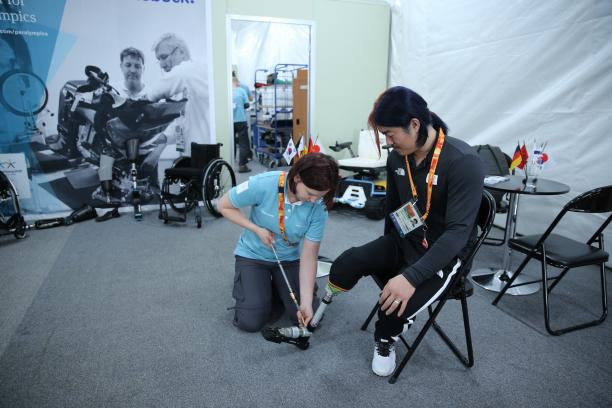 German prosthetics provider Ottobock are celebrating their 30th Paralympic anniversary in the place where they made their Paralympic debut - here in South Korea.

Ottobock first worked at the Paralympic Games at Seoul 1988 when four Australian members of staff provided technical assistance to athletes in a small gazebo.

Thirty years later, here at Pyeongchang 2018, Ottobock have four repair centres, including a 300 metre square workshop inside the Athletes Village.

The number of staff has also increased significantly since 1988 with 23 members of staff, who speak a total of 10 languages, now on hand to provide whatever assistance athletes require.

This ranges from repairing wheelchairs and prosthetics to fixing shoes and glasses.

Ottobock's chief marketing officer Christin Gunkel said his company was proud to be part of Pyeongchang 2018.

"We are delighted to be attending the Paralympic Games as an official partner again," he said.

"The Games in Pyeongchang have a special significance for us: we return to the country where Ottobock and the Paralympic Games first began the story they continue to share.

"And the Games will also serve as an occasion to celebrate this partnership’s 30 years of success."

Peter Franzel, Ottobock's director of marketing and sponsorship has revealed they expect to help more than 350 athletes throughout the Games and has insisted that they will repair anything.

"In London 2012 we repaired a paper shredder.

"It was for the Organising Committee and they were in the office next to us, and we managed to make it work again."

Franzel added that it was touching to see athletes supported by Ottobock go home with medals.

"We do a repair for them and then one day later they win a medal," he said.

"They come back and say, 'Thank you for repairing, here's my medal. I won!'

"This is always an amazing, touching moment.

"It happens many, many times."

Ottobock recently signed an agreement which will see them provide equipment to Para-athletes at next month's Commonwealth Games in the Gold Coast.