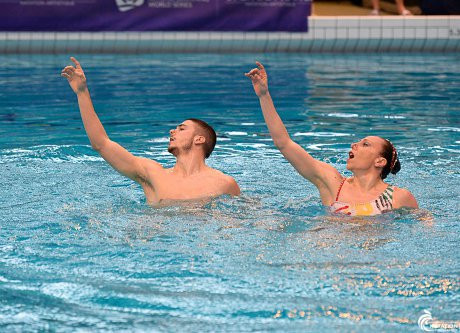 After an initial Russian flourish on the opening day of the inaugural leg of the International Swimming Federation (FINA) Artistic Swimming World Series being held in Montreuil, Ukraine and Italy took their turn.

In the first final of the session at the Maurice Thorez Stadium, Giorgio Minisini -the FINA Best Male Artistic Swimmer of 2017 - paired with Manila Flamini to take the gold medal in the mixed duet technical event with 88.5930 points.

They were followed by Japanese pair Atsushi Abe and Yumi Adachi, who earned the silver medal with 86.3358 points, and by Spain's Pau Ribes and Berta Ferreras, the bronze medallist with 82.1743.

Then, it was the turn of Ukrainian swimmers to shine in the French capital.

In the team free final, the winners got 91.6667, while France managed its first podium presence of the competition, getting the silver medals with 86.0333.

The bronze medal went to Belarus, with an accumulated total of 83.4000 points.

In the free combination final, the Ukrainian squad again got the gold medal with 92.1000 points.

The competition is due conclude tomorrow, with the contest of the last four finals on the programme: solo free, highlight routine, duet mixed free and duet free.