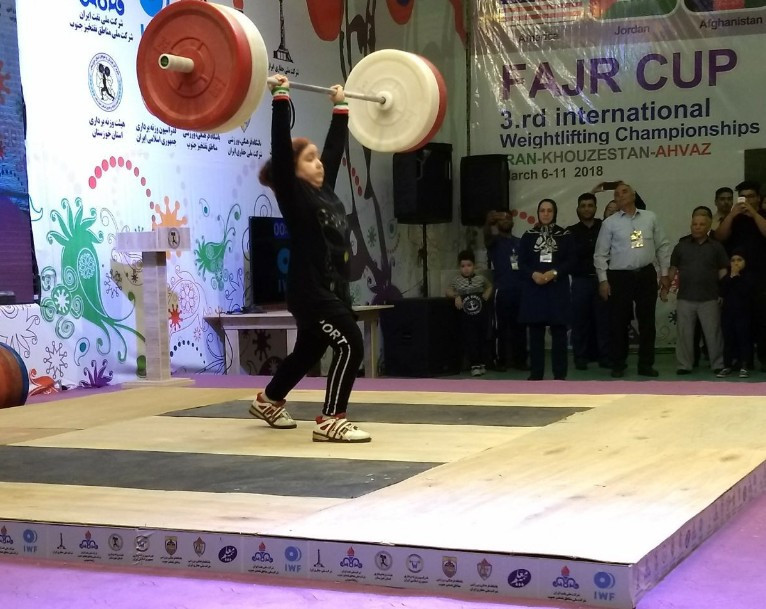 Two girls aged six and eight won the biggest cheers of the day and upstaged Giorgi Chkheidze, the men’s super-heavyweight winner on the final day of the Fajr Cup who won the top prize of $5,000 (£3,500/€4,000) by the narrowest margin.

The girls, Yeganeh Bandeh Khodo and Aysan Adib, became the first female weightlifters to appear on television in Iran, where the Fajr Cup was broadcast live on the state-owned Channel 3.

They showed off their technique on the platform to promote the recent launch of a female weightlifting programme in Iran, and were surrounded by interviewers and photographers after leaving the stage.

Standing with them was Reihaneh Tarighat, vice-president of women’s weightlifting in Iran who saw this as the highlight of her eight months working to help Iranians on to the international women’s stage.

She thanked Ali Moradi, President of the Islamic Republic of Iran Weightlifting Federation, who started the programme last year.

"We cannot improve without the support of men," said Tarighat.

"There is a very long way to go to reach our target of an Olympic gold medal."

Weightlifting has been a men-only sport throughout the 31 years since the first women’s World Championships.

The first international appearance by Iranian females, with the approval of the country’s Sports Ministry, is due to be at the Asian Youth and Junior Championships in Uzbekistan, starting on April 20.

They will send a team of four and hope to earn a qualification place or an invitation to the Summer Youth Olympic Games in Buenos Aires in October.

There were dozens of women in the audience to watch the final two contests of the Fajr Cup.

The $5,000 top prize was awarded on Sinclair points, the scoring system that measures performances in all weight classes.

Chkheidze, 20, needed to better 412 Sinclair points, scored in the 94kg by Iran’s Seyed Mousavi, to win and, despite missing his final attempt, he did it by about half-a-point.