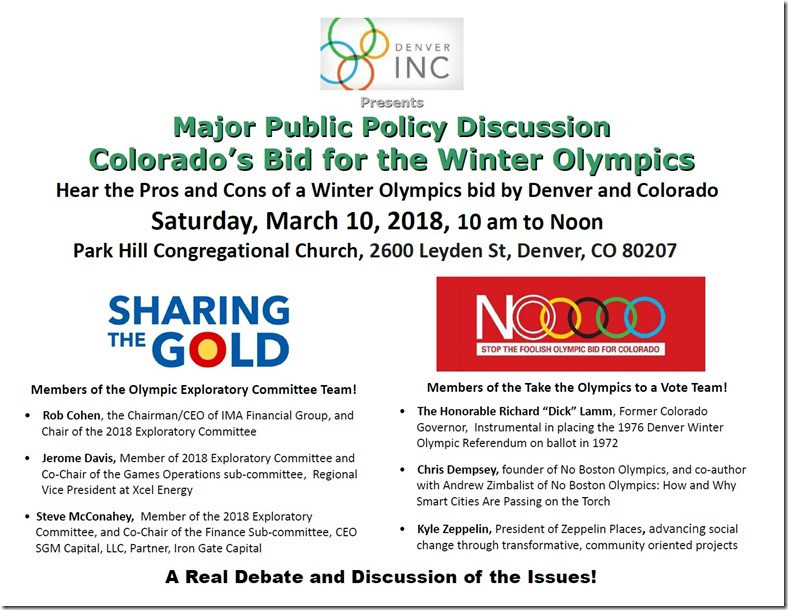 A leading member of the campaign group which forced Boston to abandon its 2024 Summer Olympic Games bid has been confirmed among the speakers at the first public debate on whether Denver should enter the race for the 2030 winter race.

No Boston Olympics co-chairman Chris Dempsey will address the attendees at the meeting in Denver on Saturday (March 10), where a possible bid from the city for the 2030 Winter Olympics will be discussed.

It is the first public gathering regarding a potential bid for the Games as officials in Denver continue to consider if they should launch an attempt at securing the 2030 hosting rights.

Three members of the Olympic Exploratory Committee, chairman Rob Cohen, co-chair of Games operations Jerome Davis and finance co-chair Steve McConahey, are all scheduled to appear at the meeting at the Park Hill Congregational Church.

Former Governor Dick Lamm, who was instrumental in placing the 1976 Denver Winter Olympic Referendum on the ballot in 1972, the outcome of which forced the American city to withdraw from hosting the event, will attend alongside Dempsey.

The duo will be backed by Kyle Zeppelin, President of development firm Zeppelin Places.

The meeting will try to find out whether there is support in Denver to back a bid for the Winter Olympic and Paralympic Games.

The event is open to the public and all interested community members can attend.

Sponsors the Inter-Neighborhood Cooperation, the association of city-wide neighbourhood groups in the city, have promised a "fair and balanced discussion" at the meeting.

Denver had originally been targeting the 2026 Winter Olympic and Paralympics but the United States Olympic Committee (USOC) recently confirmed the earliest Games they will bid for is 2030.

The Exploratory Committee, which held a three-hour meeting last month, is expected to make a recommendation about whether to pursue a bid or not in April.

The USOC instead appointed Los Angeles as its candidate city, which will now host the 2028 Games after Paris was awarded the event in 2024.