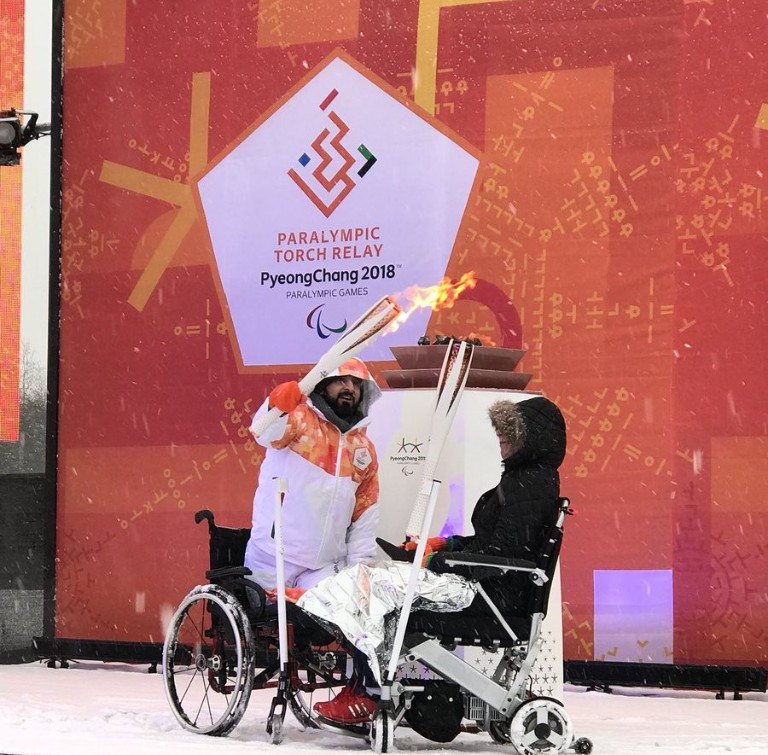 A Paralympic Heritage Flame has been lit at a ceremony in Stoke Mandeville, the birthplace of the Movement, with a week to go until Pyeongchang 2018.

Organisers were forced to battle unseasonal weather in Britain, with heavy snow forcing the public part of the event to be called off for safety reasons.

The Flame lighting still went ahead, with the event dubbed the "Spirit of Endeavour".

A lone archer shot an arrow at the start of proceedings, a nod towards the archery competition at the Stoke Mandeville Games in 1948, the forerunner to the Paralympics which were launched by Sir Ludwig Guttman.

The archer launched the first in a sequence of fireworks, before the history of the Paralympic Movement and its links to Stoke Mandeville were highlighted.

Eight-time Paralympic gold medallist Sophie Christiansen took a Torch to the stage, where the Para-equestrian athlete was joined by Ali Jawad.

Jawad, a silver medallist in the men's under-59 kilograms powerlifting event at Rio 2016, was then passed the Torch.

The powerlifter then lit the Heritage Flame, prompting another burst of fireworks.

The Flame will now be sent "virtually" to Pyeongchang, where it is set to merge with a series of regional flames in South Korea.

One was lit today in the South Korean capital, Seoul, with others ignited at Jeju Island, Anyang, Nonsan, Gochang and Cheongdo.

We celebrated at another incredible @Paralympics #HeritageFlame lighting ceremony at Stoke Mandeville Stadium - the birthplace of the Paralympic movement. Thank you to everyone who organised this event. We hope you enjoyed watching it! pic.twitter.com/JyPIPYCGQq

Each of the cities was recognised for their accessible tourism facilities and services in South Korea for people with disabilities.

The events coincided with the first full moon of the Lunar New Year and started a Torch Relay building towards the Opening Ceremony on March 9.

A total of 800 Torchbearers will carry the Torch to complete a total of 2,018 kilometres, marking the year of the Games.

"I hope the Torch Relay will break down barriers in society and celebrate inclusiveness and peace across our nation and the world," said Lee Hee-beom, Pyeongchang 2018 President.

The Games are set to take place until March 18, with a total of 570 athletes expected to take part.