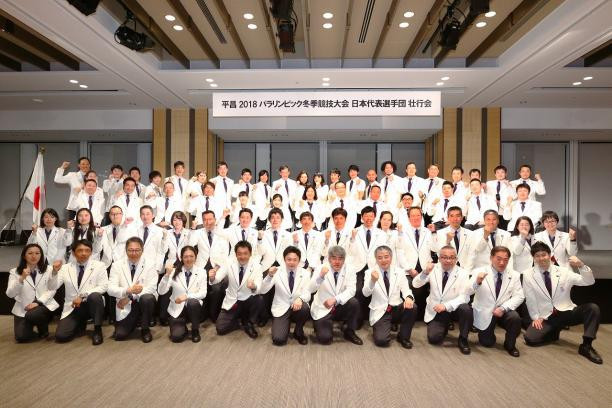 Japanese athletes set to compete at the Pyeongchang 2018 Winter Paralympics attended a series of presentations prior to their departure for the Games.

The Japanese delegation were first introduced to Prince Akishino Fumihito and his wife Princess Kiko at a special ceremony.

Alpine skier Momoka Muraoka, who will be Japan's flagbearer at the Opening Ceremony next week, then received her country's flag from Japan’s National Paralympic Committee President Mitsunori Torihara and Kuniko Obinata, a ten-time Paralympic medallist who will serve as Chef de Mission in Pyeongchang.

Japanese athletes are aiming to better their Sochi 2014 medal tally of six when they take to the snow and ice in South Korea.

As reported by Kyodo News, Obinata, who won Japan's first Paralympic Alpine skiing gold medal on home snow in Nagano in 1998, believes it is an achievable target.

"But we'll be able to meet our target if athletes and members of the delegation get the best out of ourselves.

"If we can compete well in Pyeongchang and pass the torch to the athletes competing in the 2020 Summer Games, we can raise recognition of the sports and contribute to making our society a better place for everyone to live in."

Following the royal meeting and presentation of the flag, the Paralympians watched a video message from Japanese athletes who won medals at this month's Pyeongchang 2018 Olympic Games.

Satoru Sodu, the captain of Japan's Para-ice hockey side, hopes his team-mates can draw inspiration from their Olympic counterparts.

"I hope we can ride that momentum when we compete at the Paralympics," he said.

"At Pyeongchang, I hope we can show the attractions of Paralympic sports, and motivate people with disabilities to play sports."

Japan are sending a total of 38 athletes to the Paralympics to compete in five sports - Alpine skiing, biathlon, cross-country skiing, ice hockey and snowboard.

The Pyeongchang 2018 Winter Paralympics will take place from March 9 to 18.