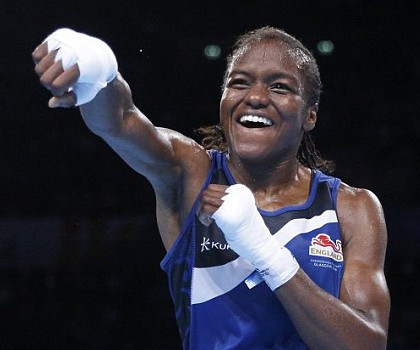 Although women have participated in boxing for almost as long as the sport has existed, female bouts have been effectively outlawed for most of the fight game's history, with officials refusing to sanction contests and most nations officially banning them.

Women's boxing first appeared in the Olympic Games at a demonstration bout at St. Louis in 1904 but it was not until 84 years later, when Sweden gave permission for women to fight, that the sport really began to take off.

A long campaign led to the International Olympic Committee (IOC) in 2009 agreeing to add women's boxing to the programme for London 2012.

The first woman ever to be awarded an Olympic gold medal was Britain's Nicola Adams, a winner over China's Ren Cancan in the flyweight division.

The decision by the IOC to include women's boxing led to other events following suit. This included the Commonwealth Games Federation, who announced shortly after the success of Adams at London 2012 that women's boxing would make its debut at Glasgow 2014.

The fact that Adams revealed soon after her Olympic triumph that she was targeting Glasgow 2014 immediately gave the event legitimacy.

The pressure on the Yorkshirewoman leading into the the Commonwealth Games was immense.

Her London 2012 victory had made her a national celebrity and catapulted her beyond sport. Adams is openly bisexual and was named the most influential LGBT person in Britain by The Independent after her victory in the Olympics.

Adams was one of England's main hopes of a Commonwealth Games gold medal at Glasgow 2014, but that brought its own expectations.

"I want to be the first and make history and bring back gold for Team England. It's a really, really big draw for me. I want to get another first under my belt."

Before Glasgow 2014, Adams went up to her old boxing club in Leeds as she carried the Queen's Baton through her home town on its way to Scotland.

Adams marvelled at how a "small, Rocky-style club in a basement with one ring and maybe six bags" had turned into a buzzing, thriving gym with 10 girls training regularly. That was the Adams effect thanks to London 2012.

Once Glasgow 2014 started, Adams beat Nigeria's Oluwatoyin Oladeji in the first round and then Sri Lanka's Erandi de Silva in the quarter-finals of the flyweight division. She then defeated Canada's Mandy Bujold in the semi-finals.

There was no doubt that Adams was taking the Commonwealth Games seriously. "It feels amazing being here," she said. "I've had a fantastic reception in Glasgow. These Games rank really highly, as high as the Olympics for me."

In the final, held in the Hydro, Adams met Northern Ireland's Michaela Walsh, who at 21 was a decade younger than her English rival.

Walsh began well and fought back strongly at the end after Adams had taken control of the middle section of the fight. The Englishwoman appeared to ease up in the closing stages, clearly confident that she had done enough in the middle rounds when a left and right combination followed by a sharp right hand had put Walsh in trouble. However, Walsh battled right to the final bell, taking the last round and turning away arms aloft convinced that she had won.

The judges certainly saw it as close. One of them scored it for Adams, while the other two scored the fight even.

Having to name a winner, one of the undecided gave Adams the nod.

It was a fitting fight to mark the debut of women on the Commonwealth Games boxing programme, 84 years after the men.

"This medal in Glasgow is up there with my Olympic gold," Adams said following the fight. "It's really nice to be able to compete for your country and I was glad I was able to do that."

Adams consolidated her position as the dominant female boxer of her generation when she retained her Olympic title at Rio 2016. After that she decided to turn professional and signed forms with Frank Warren.

The Adams effect will still be felt at Gold Coast 2018, however, where women's boxing will make its second appearance at the Commonwealth Games.

It will not be seen as a novelty but as a fully-fledged part of the programme which seems set to stay for a long time.