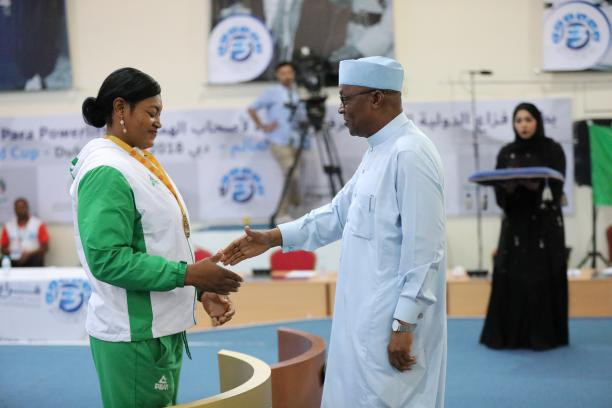 Nigeria's Folashade Oluwafeniayo became the third athlete to break a world record at the World Para Powerlifting World Cup in Dubai with an excellent lift on the final day of competition.

The 32-year-old lifted 146 kilograms to break the world record in the women's 82kg category at the Dubai Club For People Of Determination.

This was an increase of 1kg from the weight she lifted on her way to gold at last year's World Championships in Mexico City.

Despite this record-breaking lift, it seemed Oluwafeniayo was not entirely satisfied with her performance and she attempted yet another record on her third attempt but, unfortunately, she was unable to lift the 149.5kg weights.

Her compatriot Roland Ezuruike finished top of the pile in the men's under-54kg event.

Elsewhere, Jordanian athletes had a day to remember with Omar Sami Hamadeh Qarada, in the under-49kg men's, Mohammad Tarbash, in the under-54kg men's, Abdelkareem Khattab, in the under-80kg men's, and Jamil Elshebli, in the under-107kg men's, all claiming gold medals to ensure their country finished top of the overall medals table alongside Nigeria.

Ukraine came third thanks to their tally of two gold and two silver medals, whilst hosts United Arab Emirates can also be proud of their exploits as their two golds and one bronze meant they finished fourth.