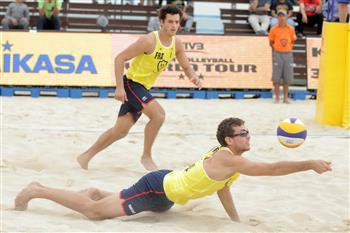 Their first match of the knock-out stages at the Iranian venue saw them come up against United States pair William Kolinske and Miles Evans.

Thiercy and Gauthier-Rat got off to a bad start in the match, losing the first game 21-18, but they then recovered to take the next two games 21-19 and 15-6 to claim an overall 2-1 victory.

After helping his team into the next round, Thiercy implied the focus was very much on their home Paris 2024 Games.

"We are a new team so we want to have more experience," he said.

"When you play against the big teams, that's when you really gain good experience.

"It would be nice to beat them [the big teams] and we hope we can.

"For now, we want to win some medals, but our final goal is to be in the Olympics."

They will now face Latvian duo Martins Plavins, an Olympic bronze medallist, and Edgars Tocs in their second round match.

Gauthier-Rat said he was looking forward to the challenge.

"They are really a good team and we have great respect for them," he said.

"We always see these great teams as a challenge.

"We are happy to play them, whatever the outcome may be."

Two wins against 🇸🇪 and 🇱🇻 today 💪🏻🎉👌🏻
Tomorrow we play 🇮🇹 for a spot in the quarterfinals 😏… https://t.co/jHRDeRVyw0

Another stand-out pair from today's matches were Alexander Walkenhorst and Sven Winter of Germany.

The duo had to come through qualification on the first day of the competition to make it to the main draw, but have kept up their good form to qualify for the second knock-out round after victory against Latvians Rihards Finsters and Aleksandrs Solovejs.

The first game between the pair was a thrilling contest and the two sides were almost inseparable.

In the end, however, Walkenhorst and Winter recorded a 30-28 win to take the lead.

The second game may not have lasted as long as the first but it was still a close affair with the German duo eventually coming out on top by a 21-18 scoreline to take a 2-0 victory overall.

They will now face Tiziano Andreatta and Andrea Abbiati of Italy in their second round match.

Nils Ehlers and Lorenz Schümann ensured there was more German success in the first knock-out round by seeing off Jyrki Nurminen and Santeri Siren of Finland.

Things seemed to be conspiring against them in the first game, which they lost 25-23, but they recovered well to take an overall 2-1 victory thanks to 21-19 and 15-13 wins in the final two games.

Ehlers and Schümann will also face Italian opposition in the next round as they come up against Alex Ranghieri and Marco Caminati.

Tomorrow will see the second and third round matches take place, which will decide the semi-final line-ups.