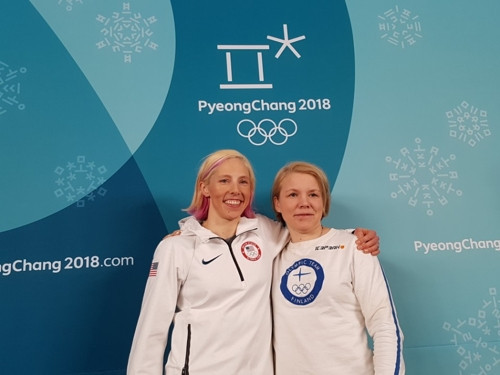 Terho received the most amount of votes with 1,045 and 831 athletes voted for Randall during an election held at the Winter Olympic Games here.

They are due to serve eight-year-terms on the Athletes' Commission.

The newly-elected members of the Commission are scheduled to be officially sworn in as IOC members at the Closing Ceremony of Pyeongchang 2018.

They must first, though, be officially voted in as members at the IOC Session.

It is still not yet known whether the Session will take place as planned as significant numbers of the membership have already left Pyeongchang 2018.

Yang Yang of China is also due to stand down from the Athletes' Commission.

It remains possible that her replacement will be chosen at the Session but the third-placed athlete will not necessarily be the competitor who is selected.

All accredited athletes competing at Pyeongchang 2018 were eligible to vote.

Terho and Randall will serve under chairperson Kirsty Coventry of Zimbabwe, who is taking over at the helm of the Commission from Ruggiero for the next two years.

Terho was part of the Finland teams which clinched ice hockey Olympic bronze medals at the 1998 Games in Nagano and 12 years later in Vancouver.

It is the third consecutive IOC Athletes' Commission election at the Winter Olympics that a female ice hockey player has been voted in following Ruggiero at Vancouver 2010 and Canada's Hayley Wickenheiser at Sochi 2014.

Congrats @ELaaksonen3 and @kikkanimal on your election to the IOC Athletes’ Commission! @Athlete365 #goodluck pic.twitter.com/mCBK0gFmBK

Terho, 36, is already a Board member of the Finnish Olympic Committee and Finnish Ice Hockey Federation.

"I want to make sure things that we continue to move in the right direction from the things that have been done," she said.

"We want to give athletes the opportunity to look after their career but also take care and give support to them outside of the sporting world."

The 35-year-old Randall was a member of the American squad which won the team title at the 2013 World Championships in Val di Fiemme.

"I have so much passion and energy to put toward the Olympic Movement and it feels so good to have the athletes put their faith in me," said Randall.

"I look forward to representing the athletes and making the Olympic Movement strong in the future.

"This is going to be a really fun ride."

Terho will be the second member from Finland alongside Sari Essayah, who joined the IOC in 2016.