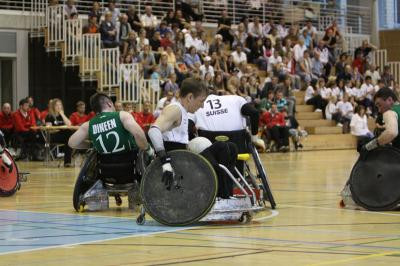 The International Wheelchair Rugby Federation (IWRF) have announced the schedule for April's 2018 World Championship Qualification Tournament at the Swiss Paraplegic Centre in Nottwil.

The top four teams from the tournament will join Australia, Canada, Denmark, France, Great Britain, Japan, Sweden and the United States at the 2018 IWRF World Championship, which is taking place in Sydney, Australia, in August.

The qualifier will see eight teams divided into two pools.

Pool A will contain hosts Switzerland, Germany, Colombia and Poland whilst Pool B will see New Zealand, Brazil, South Korea and Ireland face off.

The event will start on April 4 with an Opening Ceremony taking place at 4.30pm before Switzerland take on Colombia in the first game of the tournament an hour later.

Germany will also take on Poland on day one.

The next two days will see five pool matches take place on each day.

On day two, Brazil will play South Korea, Ireland will meet New Zealand and Germany will collide with Colombia.

Switzerland and Poland and New Zealand and South Korea will also lock horns.

With the pool rankings decided, the fourth day of the tournament will see the semi-final matches take place before the gold medal match on April 8.

The event will then close with an awards ceremony.

The 2018 IWRF World Championship will be held at the Sydney Olympic Park Sports Centre and Genea Netball Centre from August 5 to 10, with hosts Australia looking to defend their title on home soil.