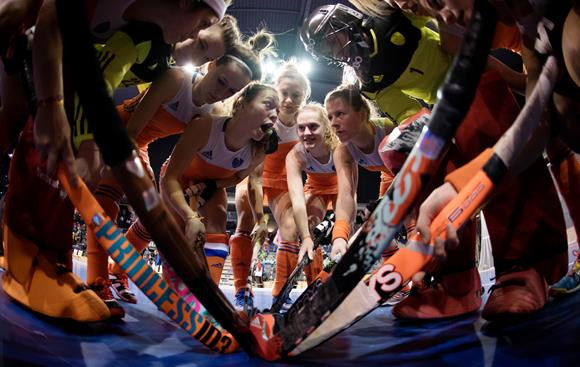 Defending champions The Netherlands added to their two wins yesterday with two more victories in the women’s event on day two of the International Hockey Federation (IHF) Indoor Hockey World Cup at the Max-Schmeling-Halle in Berlin.

The two-time tournament champions defeated Belarus 4-1 in their first game in today’s Pool A matches before seeing off 2011 competition hosts Poland in their second by a 4-3 scoreline.

The other results in the first Pool A matches today saw the United States beat Kazakhstan 7-2 whilst Switzerland beat Poland 3-1.

Along with The Netherlands' win in the second round of matches, Belarus thrashed Kazakhstan 8-0 and the US lost 3-1 against Switzerland.

Hosts Germany continued their fantastic start to the competition with a 6-0 win over Ukraine in Pool B.

The Czech Republic, bronze medallists in 2015, beat Russia 3-1 before Australia played out an exciting 3-3 draw with Namibia in the early matches

Australia then went on to win 2-1 against Russia as Germany secured a win over the Czech Republic by the same scoreline.

Namibia recorded a shock 3-2 win over 2011 bronze medallists Ukraine to secure their first three points of the competition.

In the men's tournament, Germany edged passed Czech Republic 6-5 before coming out on top against Poland 6-3 in their late match.

Trinidad and Tobago's first match of the day saw them lose 7-6 to Australia before they secured their first win of the tournament with a 6-4 victory over Kazakhstan.

Czech Republic and Australia drew 2-2 in the other late Pool A match.

The later matches saw South Africa beat Iran 6-3, Austria defeat Russia 8-4 and Belgium surprisingly come out on top against Switzerland by a 2-0 scoreline.

Tomorrow sees the final round of pool matches take place in both the men’s and women’s tournament whilst the men's quarter-finals will also be played.