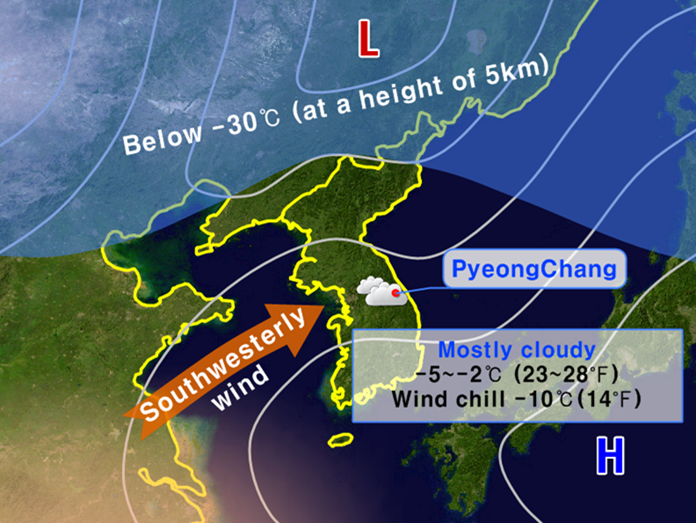 Temperatures at the Opening Ceremony of the Winter Olympic Games here are expected to be between minus five and minus two degrees with a wind chill factor of minus 10 degrees, Pyeongchang 2018 claimed in a weather update today.

The forecast for Friday's (February 9) Ceremony at the open-air Olympic Stadium is slightly warmer than was first feared.

It was thought temperatures could dip as low as minus 21 degrees.

But the wind chill could still provide a "real feel" temperature of between minus nine and minus six, according to AccuWeather.

Organisers have implemented a number of measures for the event, which is expected to be attended by around 35,000 people, in a bid to combat the cold weather and wind chill.

Wind screens have been put in place around the venue, while hot food and drink tents are expected to line the routes outside of the Olympic Stadium.

Pyeongchang 2018 President Lee Hee-beom had previously claimed some spectators had decided to "cancel" their Opening Ceremony tickets due to the predicted cold weather.

It has also been reported that athletes from some countries who have events in the days immediately following the Ceremony may skip the spectacle in order to protect their health.

The Pyeongchang 2018 Opening Ceremony has not yet sold out, a rare occurrence as seats for the showpiece are usually among the hottest tickets at an Olympic Games.

Lee also said a special bag with hot packs, seatwarmers, a blanket, a hat and a windbreaker would be given to each spectator.

Temperatures here have slowly risen in previous days but fears remain over the Opening Ceremony, particularly as it is taking place at a venue without a roof.

Pyeongchang 2018 have also warned that temperatures will drop in the days after the Ceremony due to "incoming cold air from the northwest and a strong wind chill factor".